Netflix is testing a human curated discovery feature on iOS called "Collections" that surfaces TV shows and movies the user might be interested to watch (via TechCrunch). 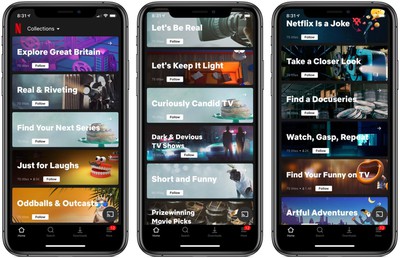 Collections in Netflix for iOS
Netflix says the content is curated by experts on its creative teams and that the collections are organized according to similar factors, such as genre, tone, story line, and character traits.

For users who opted into the test, the Collections option appears at the top-right of the Netflix app's homepage. Some collections currently showing up have names like "Let's Keep It Light," "Dark & Devious TV Shows," "Prizewinning Movie Picks," "Watch, Gasp, Repeat," and "Women Who Rule the Screen."

If a particular collection interests you, you can tap a Follow button and get updates when new TV shows and movies are added.

The human-led curation feature, first spotted by Jeff Higgins on Twitter, is a change of direction for Netflix's recommendations system, which typically selects content algorithmically based on the user's viewing history. When asked about the feature, Netflix told TechCrunch:


"We're always looking for new ways to connect our fans with titles we think they'll love, so we're testing out a new way to curate Netflix titles into collections on the Netflix iOS app. Our tests generally vary in how long they run for and in which countries they run in, and they may or may not become permanent features on our service."

As the above comment suggests, there's no word yet on if or when it will roll out to all users, or whether we'll see it on other platforms, like Netflix for Apple TV.

Bawstun
How about they add a decent search feature or index by category feature? It’s nearly impossible to find what is on Netflix. I’m constantly using Google.
Score: 10 Votes (Like | Disagree)

now i see it
not much interesting to watch no matter how it's organized
Score: 6 Votes (Like | Disagree)

wlossw
I pay for Netflix and hbo and still just download everything into Plex.

App improvements Too little too late.


I look forward to paying for Disney plus and also downloading everything I watch into plex just so I don’t have to use 50 video apps.
Score: 5 Votes (Like | Disagree)

EchoplexSE
Just waiting for them to ditch autoplaying previews
Score: 3 Votes (Like | Disagree)

ikramerica
I’ll stick to the “Gene” picks thank you.
Score: 3 Votes (Like | Disagree)

Shirasaki
I wonder how good or bad this “human curation” thing is. Basically do the same thing as Apple Music does? One guy in Netflix thinks his taste is the taste of the entire user base?
Score: 3 Votes (Like | Disagree)
Read All Comments