Hands-On With CarPlay in iOS 13: Everything That's New

Along with many new features for the iPhone and the iPad, iOS 13 brings updates to CarPlay, overhauling the interface for the first time in years and adding useful new functionality.

In our latest YouTube video, we went hands-on with ‌CarPlay‌ in iOS 13 to give MacRumors readers an idea of what's new with Apple's in-car platform.

Subscribe to the MacRumors YouTube channel for more videos.
‌CarPlay‌ in iOS 13 has a redesigned and revamped Home screen with new table views, rounded corners, and an updated Home button that swaps between a dashboard icon and an app row icon depending on what app you're using.

The new tile-like user interface displays the Maps app, Shortcuts, Siri suggestions, Music Now Playing interface, and upcoming Calendar events all at a glance, which is convenient. Tapping on any of the tiles opens up the relevant app. You can, of course, still access the standard icon list from previous versions of ‌CarPlay‌ with a swipe.

In the new Calendar app, you can see all of your upcoming events for the day, which is useful for when you get in the car in the morning. If a calendar event has a location associated with it, you can tap on the event and get directions to where you need to go. 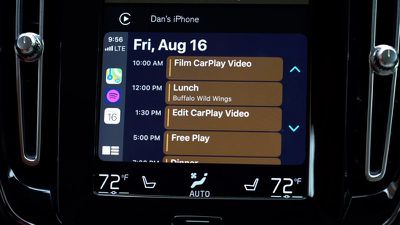 Maps has an updated look and feel, and it takes advantage of all of the features in iOS 13. In supported areas, there's better detail for roads, buildings, parks, and more, and you can use the Favorites and Collections features to route to saved locations. It's also easier to find points of interest along your current route in Maps.

‌Siri‌ in Maps uses more natural language, which is a great update. As an example, instead of hearing "Turn right in 1,000 feet," ‌Siri‌ might instead say "turn right at the next traffic light."

Updates to the Music app make it easier to navigate through your music library, playlists, radio stations, and more, so you can find just what you want to hear with little effort. The Now Playing UI has also been updated with album art throughout the entire ‌CarPlay‌ interface, which is an improvement over ‌CarPlay‌ in iOS 12.

There's ‌Siri‌ support for third-party navigation apps, so you can ask ‌Siri‌ to do something like route you home using the Waze app instead of Apple Maps. In the future, ‌Siri‌ support could also come to music apps like Spotify in ‌CarPlay‌ thanks to new SiriKit APIs. You're also now able to use "Hey ‌Siri‌" across all vehicles for easier ‌Siri‌ activation.

For those with HomeKit products like garage door openers, there's a handy ‌Siri‌ suggestions feature that does things like bring up an icon to open up your garage when you approach home. There are multiple ‌Siri‌ suggestions like this that are going to vary based on your ‌CarPlay‌ usage, but it's definitely a neat and useful addition.

‌CarPlay‌ has a Settings app in iOS 13, so you can adjust Do Not Disturb While Driving, turn ‌Siri‌ on and off, turn off album art, and switch the appearance between the default dark mode and a new lighter user interface.

Also new to ‌CarPlay‌ is support for using ‌CarPlay‌ and your ‌iPhone‌ at the same time. In earlier versions of ‌CarPlay‌, if you had Maps up but wanted to do something like change the music on your phone, it would kick you out of Maps on ‌CarPlay‌. That's not the case anymore, so now you can have Maps up while doing other things on your ‌iPhone‌.

All in all, iOS 13 brings some much needed changes to the ‌CarPlay‌ experience, and it should be a welcome update for ‌CarPlay‌ users. Know of an iOS 13 ‌CarPlay‌ feature that we left out? Let us know in the comments.

PlainEnvelopes
I love the new apple car play. Made running the beta on my phone worth it.
[doublepost=1565986126][/doublepost]

I have a very old car so bear with me a second because I'm thinking of buying a newer car soon: Do any of these new features mean that they'll work on *current* cars with CarPlay support, or would the manufacturers/dealerships also need to update something on their end?

If the car you are going to purchase has apple car play and a phone running IOS 13 that is all you have to do. No dealership help is needed.

Unless you have a new BMW and they charge you to use apple car play.
Score: 7 Votes (Like | Disagree)

Also new to CarPlay is support for using CarPlay and your iPhone at the same time. In earlier versions of CarPlay, if you had Maps up but wanted to do something like change the music on your phone, it would kick you out of Maps on CarPlay. That's not the case anymore, so now you can have Maps up while doing other things on your iPhone.

I have a very old car so bear with me a second because I'm thinking of buying a newer car soon: Do any of these new features mean that they'll work on *current* cars with CarPlay support, or would the manufacturers/dealerships also need to update something on their end?

The beauty of CarPlay is that it is essentially a video running on your iPhone being streamed to the stereo. Your car's function is solely to provide input (i.e. the touchscreen says such and such area is being pressed), and everything is rendered on the iPhone. So as long as CarPlay does not require additional funcionality (e.g. Multi Touch), which I believe is highly unlikely for the time being and for a long time coming, since brand new 2020 cars are still using the initial CarPlay protocols, it will still work.
Score: 5 Votes (Like | Disagree)

The only deficiency you speak of is not a deficiency at all. It's user error which is what you are running into.

For example, i turn the dial on my Mazda MX-5 RF's instrument cluster lights down 1 notch from the brightest setting and instantly night mode auto activates on my iPhone (and yes it will auto turn to day when the car believes its bright enough outside). If I leave it on the brightest setting, it will keep day mode on thinking I want the brightest things like my cluster to be blaring at my face.
Score: 5 Votes (Like | Disagree)

I'm clearly missing something fundamental with carplay. I was actually disgusted with the original carplay because there wasn't a contacts app - something I would use ALL THE TIME. In the new version it's still missing :-(. I'm totally like WTF. What's the reason for not including it - am I missing something???

The expectation is that WHILE YOU ARE DRIVING, you will say "Hey Siri, call Fred Flintstone", not scroll through an app trying to find contact info...
Score: 4 Votes (Like | Disagree)

Funny, because, having owned a BMW, “total junk” is how I’d describe iDrive. It’s half the reason I got rid of the car. Maybe BMW Cockpit will be better. I guess there’s something out there for everyone.
Score: 3 Votes (Like | Disagree)
Read All Comments