Apple is directly or indirectly responsible for creating a total of 2.4 million jobs in the United States, the company announced today.

Apple says that this is four times the number of American jobs that were attributable to the company compared to eight years ago, and that it is on pace to directly contribute $350 billion to the U.S. economy as announced last year. 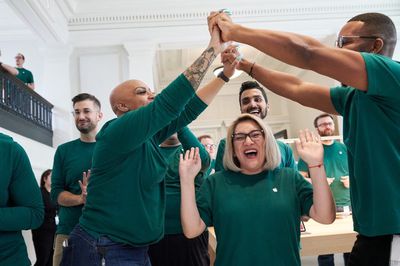 That 2.4 million figure includes Apple's own employees and those at U.S. companies that create components for Apple devices or otherwise work at Apple, such as battery testing company Maccor and modem company Broadcom, which has a manufacturing facility in Colorado.

Apple also works with Texas company Finisar, and since getting $390 million as part of Apple's Advanced Manufacturing Fund, Finisar is on track to fill 500 full-time positions. Finisar will soon begin shipping the VCSELs used to power Face ID. According to Apple, it spent a collective $60 billion across 9,000 American companies in 2018.

Apple itself currently employs 90,000 employees across 50 states and is on track to create 20,000 new jobs across the U.S. by 2023 with new campuses in Seattle and San Diego.

now i see it
if i sell one copy of my flashlight app for $.99 cents, is apple providing me with a job?

swingerofbirch
While I think all corporations are out for themselves, I think Apple is more than most.

The number of employees they have per their revenue is very low compared to other similar tech companies.

I "worked for" Apple in a couple of capacities but was not employed by them, even though if you called AppleCare or the Apple Store you would have gotten me on the phone.

A lot of their contractors run rackets and Apple pits the contractors against each other so there are really no labor laws being followed.

Apple contracted Arise. Arise contracts "corporations." But the corporations are one person. I was walked through the process of incorporating myself by Arise. In doing so, Arise was able to contract my corporation (which was just me) to provide work for Apple. I had to pay for training, Internet service, and a monthly fee to Arise to access the network.

It was extremely cut-throat. We received daily e-mails about how bad of a job we were doing and to increase our stats or that Apple would dump us. There were quite a few companies also contracted by Apple for AppleCare and the Apple Store.

One other huge problem was that I was given the exact wrong information about being allowed to work with my disability benefits. I was told I could work under Ticket to Work. However, that only applied to people with SSDI and not SSI. Unfortunately even government offices are not very familiar with all of the rules regarding the various programs.

I had to pay back every dollar I earned while working for Apple.

I was terminated along with my entire entering class right around Christmas anyway. Given no reason. I believe it's because Arise made a lot of money from charging for training which was part of their business model, so it made financial sense to have high churn.

I've tried contacting Apple many times in many ways to tell them about the deplorable practices. But they have never responded to me.

They were able to skirt every labor law in existence. While I did everything an employee does for customers, I was considered a business being contracted by a contractor. What sort of business do you have to train in the exact method of helping your customers? And what sort of business do you give access to your internal AppleCare and Web Sales tools? That's not a business. That's an employee, in everything but name.

I do like many Apple products, but when it comes to their business practices there's not much about them I don't find disgusting.
Score: 21 Votes (Like | Disagree)

CarpalMac
That there is a masterclass in statistical spin.
Score: 18 Votes (Like | Disagree)

Rogifan
“Altogether, Apple is responsible for creating and supporting 2.4 million US jobs across all 50 states, four times the number of American jobs attributable to the company eight years ago.”

How are they defining “creating and supporting”? Is the Fed-Ex driver who delivers an iPhone to someone’s house captured in that 2.4M figure? I’m assuming using their logic lots of companies could claim big numbers like this.
Score: 17 Votes (Like | Disagree)

Jimmy James
There is only one Jobs!
Score: 13 Votes (Like | Disagree)