Apple introduced its bug bounty program for iOS devices in August of 2016, allowing security researchers who locate bugs in iOS to receive a cash payout for disclosing the vulnerability to Apple. Prior to now, non-iOS devices were not included, a move that has previously been criticized by the security community. 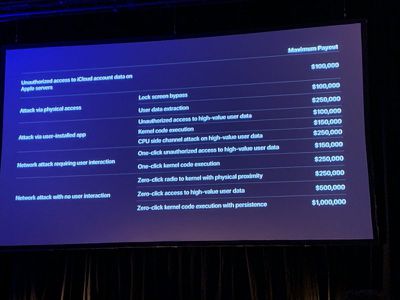 Apple's lack of a macOS bug bounty program made headlines earlier this year when a German teenager initially refused to hand over details of a major macOS Keychain security flaw because Apple didn't have a payout. While he did ultimately provide the info to Apple, he said that he hoped his refusal would inspire Apple to expand its bug bounty program, which the company has indeed done.

With the launch of the new macOS bug bounty program, Apple is opening its bug bounties up to all researchers later this year and it is increasing the maximum size of the bounty from $200,000 per exploit to $1 million depending on the nature of the security flaw. A zero-click kernel code execution with persistence will earn the maximum amount.

Researchers who discover vulnerabilities in pre-release software before general release can qualify for up to a 50 percent bonus payout on top of the base bug bounty amount.

As reported earlier this week, Apple also plans to provide vetted and trusted security researchers and hackers with "dev" iPhones, aka special iPhones that provide deeper access to the underlying software and operating system that will make it easier for vulnerabilities to be discovered.

Apple is providing these iPhones as part of its new iOS Security Research Device Program, launching next year. Apple's aim with these new bug bounty efforts is to encourage additional security researchers to disclose vulnerabilities, ultimately leading to more secure devices for consumers.

smithrh
Overdue, but a good move.
Score: 17 Votes (Like | Disagree)

This is welcome news. It would be nice if Apple could fully secure its own software but that's just not how the industry works.

There's an old saying I'll paraphrase. "No plan of battle survives first contact with the enemy".

No software testing can put every piece of software into every possible configuration. One different application, combined with a different time zone, and a screen configuration can change things enough for something inside to cry "uncle".

Just like my old man used to say. Never buy the first year of a new model car or truck. Give it a year or two for some other idiot to find out the wiper switch doesn't like prune fumes, or some other issue no one thought up....
Score: 11 Votes (Like | Disagree)

apple probably figured its cheaper to have someone look for bugs than hiring a team of engineers.

Highly doubt that — Just more eyes looking. Apple is secretive, not cheap. They have an information-sharing issue.
Score: 6 Votes (Like | Disagree)

apple probably figured its cheaper to have someone look for bugs than hiring a team of engineers.

Also, there are legal issues if an Apple engineer reverse engineers third-party apps on their platform and looks at their code, to use as part of an attack. This could lead to accusations that Apple copied from third parties' code, something that independent researchers don't run into.
Score: 6 Votes (Like | Disagree)

now i see it
Hackers are now called "researchers".
Score: 5 Votes (Like | Disagree)

killawat
these rates look competitive compared to black market rates especially since the money is clean.
Score: 3 Votes (Like | Disagree)
Read All Comments

Friday November 25, 2022 2:58 am PST by Sami Fathi
An Apple engineer has addressed the lack of lossless audio support in the second-generation AirPods Pro in a new interview. Current Bluetooth technology in the AirPods lineup means that Apple's audio products do not support Apple Music Lossless audio. Apple has previously hinted that it may develop its own codec and connectivity standard that builds on AirPlay and supports higher quality...
Read Full Article • 188 comments