Apple is now selling LEGO's "Hidden Side" LEGO kits that are designed to offer a mixed physical and augmented reality experience.

Hidden Side is a new series of LEGO sets that are based on a "chilling, creative world of ghosts," providing kids with a building toy that comes to life thanks to augmented reality on a smartphone. 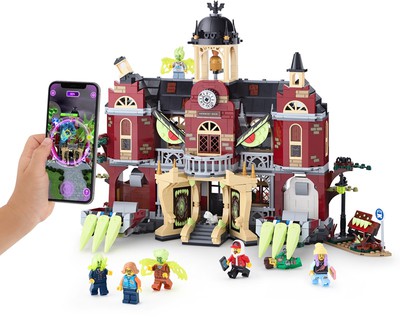 Kids can build up the sets and then view the sets on an iOS device for interactive augmented reality gameplay that varies based on the set. With the Wrecked Shrimp Boat set, for example, kids explore a sunken boat that has "strange, surreal secrets," and then engage in a boss fight.

All of the sets have unique interactions, with mysteries to solve, items to find, games to play, ghosts to collect, and a ghost boss battle. Apple is selling four of the LEGO Hidden Side sets:

Like traditional LEGO sets, all of these kits come with mini figures, animals, and other accessories that fit the theme along with all of the building materials to create the intended design.

All of the sets are available from the Apple online store as of today, and may soon be available in Apple retail stores as well.

Naraxus
Yeah no. My kids are going to play in actual reality and not this "virtue" or "augmented" nonsense.
Score: 11 Votes (Like | Disagree)

zifty
As if kids need more screen time. Legos encourage creative, physical play without the need for a screen or app -- and that's what makes them still awesome today. Hard pass on this AR combo.
Score: 6 Votes (Like | Disagree)

*Cellphones weren't prolific. Those big Motorola bricks were the only game in town, and only for rich people.

When I was a kid, a "mobile phone" was one that had an extra long cord.
Score: 3 Votes (Like | Disagree)

Doctor Q
Who says they're for kids? I want to play with this!
Score: 3 Votes (Like | Disagree)

chfilm
This could be pretty awesome actually! Can you imagine an entire “movie” as in story playing out around a lego set that you have to build? I mean, the figures coming to life and start walking around, and then they’re really going on a quest around your living room for 15 minutes or so?
Score: 2 Votes (Like | Disagree)
Read All Comments