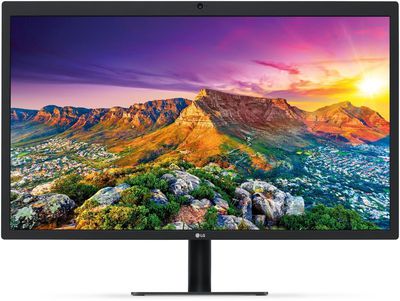 The display connects to a Mac using a Thunderbolt 3 cable, and this version of the monitor can connect using USB-C, which means that it's also compatible with the iPad Pro. There are three downstream USB-C ports with speeds up to 5Gb/s, and when used with a Mac notebook, charging over TB3 is supported with up to 94W of power available.

There are built-in stereo speakers, an included camera, and a microphone, along with an adjustable stand.

Apple stopped selling the original LG 5K UltraFine display earlier this year, and as of May, it was listed as "Sold Out" and was unavailable for pickup in Apple retail stores.

After Apple introduced a new version of the 4K LG UltraFine model, there was speculation that this new 5K model would also soon show up in the store, which has indeed happened.

The original 4K and 5K UltraFine Displays were designed by LG in partnership with Apple and were created to be used with the 2016 13 and 15-inch MacBook Pro models, which supported Thunderbolt 3 for the first time.

Apple is developing its own Pro Display XDR with a 6K resolution for release later this year, but its premium $5,000 price tag makes it too pricey for use by the general population, which means Apple is likely to continue to offer the LG displays for some time.

The new LG 5K UltraFine display can be purchased from the online Apple Store as of today, and it should soon be in retail stores.

Rayban
Does it come with a stand?

Edit: It does! Wow what a revolutionary and bold move by LG!
Score: 26 Votes (Like | Disagree)

Freida
How is this better than the previous version?
Also, why is the top bezel thicker than the bottom? Bloody hell
Score: 17 Votes (Like | Disagree)

Nik
Why on earth didn’t they get rid of the ridiculous top bezel?

For the new 16 inch MacBook Pro. We have seen this with the new XDR Display too.

Therefore we can conclude that the new 16 inch MBP requires more power which also results in higher performance components.
Score: 16 Votes (Like | Disagree)

Dixie Normous
Note that along with 6K Apple display, this one also provides 94W of power, while previous generation provided 87W.

There are no MacBooks in lineup right now that consume 94W, top of the line 15" MacBook consumes just 87W.

drinkingtea
That is such an ugly monitor.
Score: 13 Votes (Like | Disagree)

I don’t know how good the display quality is but these LG screens do not look very aesthetically pleasant. I recently bought a HP monitor and it is just so pretty, glossy and beautiful to look at, I don’t feel the same about these ones.

Their OLED Tv's are much better design wise.

But nothing beats the all aluminium older Apple Cinema Displays, they were timeless.

How is this better than the previous version?
Also, why is the top bezel thicker than the bottom? Bloody hell