Twelve South today launched a new product called the "StayGo," which is a portable hub that connects to USB-C MacBooks and MacBook Pros. 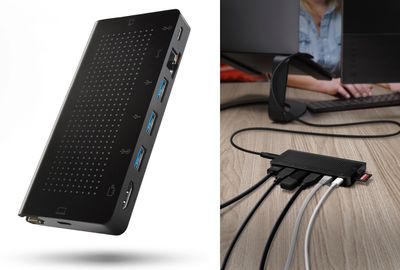 Note: MacRumors is an affiliate partner with Twelve South and Amazon. When you click a link and make a purchase, we may receive a small payment, which helps us keep the site running.

According to the company, the hub restores all eight legacy ports and connections to modern Mac notebooks. This includes: three USB-A ports (USB 3.0), one 4K HDMI port, one Gigabit Ethernet port, two USB-C ports (one for power input and one for connecting to the computer), and independent SD and Micro-SD card ports.


The StayGo comes with a 1-meter cable that is long enough to hide the accessory and its connected cables out of sight when you're working at home. The company is pitching the new device as a combination home and travel companion, which means that it also includes a 6-inch travel cord (seen below on the right) that stores inside the hub.

StayGo is available for $99.99 on TwelveSouth.com and at Amazon.

4487549
Watching him unplug the cable without ejecting the drive first gives me the same level of anxiety as watching Brienne of Tarth close the book before the ink dried.

problem is, it's a limitation of the format. 4K@60Hz takes up too much bandwidth, the USB can't go faster than USB2 speeds with that going on, the ethernet would be likewise strangled. Is why I reckoned Thunderbolt 3 is really the only way to go. (And the Retina Macbook too limited in being without it.)

HDMI 2.0 and DisplayPort are both 60Hz, and there are several dongles that support have supported that for years. The CalDigit HDMI/DP dongles support multiple 4k monitors at 60Hz, so maybe the solution is just don't provide power pass-through. 30Hz is a dealbreaker in any product released after 2015.
Score: 3 Votes (Like | Disagree)

haruhiko
whooooops $99.99 for this generic hub?
Score: 2 Votes (Like | Disagree)

But it’s unavailable now for some reason. Unfortunately, it doesn’t have the extra USB-C and only two USB-A 2.0. Not quite the same, but close.
Score: 1 Votes (Like | Disagree)

Yeah, I get the bandwidth issue. What's missing is some common sense from these manufacturers. 30Hz is a dealbreaker. It shouldn't even be an option. It's like a connecting flight with a 30 min layover. The goal shouldn't be a passive one-port solution to rule them all (at the cost of 60Hz).

For example, a double dongle solution could be:

Or combine power with data and ethernet if there's an advantage to that...

But as it currently stands, there are several options I don't need, and too many compromises to accomplish the few basic connections I'm trying to replace (from missing ports). It's like trying to buy a Toyota, and there are 10 different packages that are in conflict with each other.

Yeah, USB-C should have been 20Gbps right out of the gate. What you're looking for is USB 3.2 Gen 2x2, and yes, that is the actual name for 20Gbps USB, lol. If I remember right it's coming out sometime this year, so it might be in the redesigned MBP this autumn. There is also USB 4 around the bend and it is based on Thunderbolt, so everything should get much faster and much cheaper in a couple years. The specs are supposed to be finalized around now but usually don't show up in shipping products until a year or two later. However, I'm wondering since Apple is already so invested into Thunderbolt and all their ports are backwards compatible already if they will be ready sooner in time for the redesigned MBP. Just don't expect there to be many non-Thunderbolt (and therefore less expensive) accessories that take advantage of the 40Gbps.
Score: 1 Votes (Like | Disagree)
Read All Comments