The newest version of Spotify for iOS, released yesterday, quietly added support for Apple's multitasking Slide Over and Split View feature on the iPad.

As noted on Reddit and highlighted by The Verge, you can now open and use the Spotify app alongside another app in Split View, or open it up in Slide Over to quickly access Spotify controls without having to close the current apps you have open. 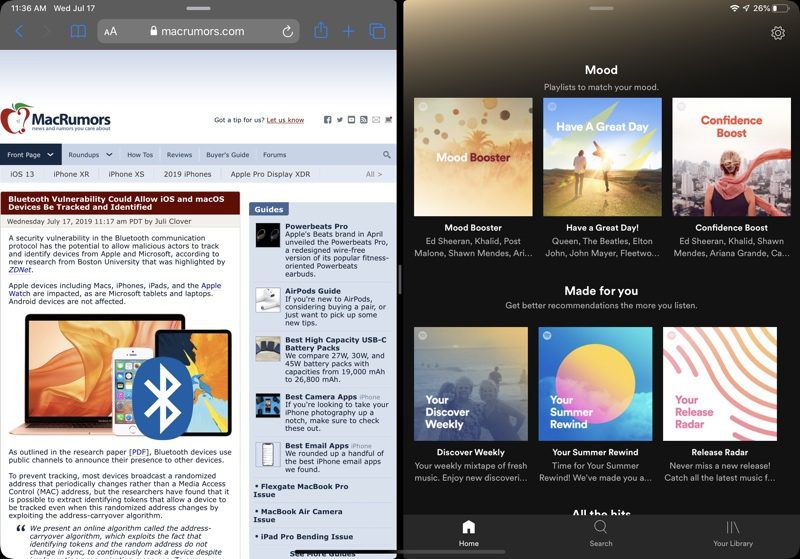 Apple's Split View and Slide Over multitasking features were first introduced in 2015, so it's taken Spotify quite some time to implement support for the functionality.

('https://www.macrumors.com/2019/07/17/spotify-ipad-apple-multitasking/')
Apple's Split View and Slide Over multitasking features were first introduced in 2015, so it's taken Spotify quite some time to implement support for the functionality.

To be fair, they've been very busy campaigning globally against having to make a financial contribution to Apple's rich and vibrant platforms they make money on.
Rating: 6 Votes

techfreak23
I don’t know what the hell Spotify’s decision process for implementing new features or development cycles are like, but it always takes them FOREVER to implement new features. I mean we had to wait over 3 years for them to finally come out with an Apple Watch companion app...
Rating: 2 Votes

Saturnine
Well this is a good thing but how hard would it be for Spotify and plenty of other companies to actually write proper release notes? Apple should mandate it. Plenty of people will totally miss this.
Rating: 2 Votes

Ultramove69
I’m pretty excited about this, anything that helps increase my productivity (or song at least.)
Rating: 1 Votes

Mike MA
Why permanently looking at some album art when listening?
Rating: 1 Votes

Why permanently looking at some album art when listening?