The first official photos of Samsung's flagship Galaxy Note 10 device appear to have been leaked onto the web, courtesy of MySmartPrice's Ishan Agarwal. After the Galaxy S10 and S10+, the Galaxy Note line is Samsung's larger smartphone equipped with a stylus. The Note 10's unveiling will come on August 7, so about a month ahead of when we're expecting to see Apple's 2019 iPhone lineup. 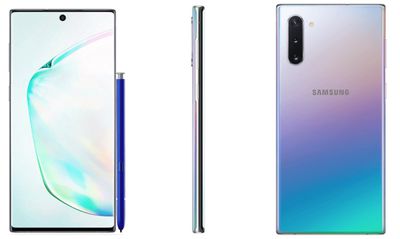 The image shown above reveals the Galaxy Note 10 will come in a pearlescent silvery-blue color, while a second leaked image reveals an additional black version will also be available. Otherwise, as per previous rumors, the Galaxy Note 10 adopts the same curved-screen, glass-body design used in previous Note devices, but the front now features an edge-to-edge display with a single center hole punch camera.

Over on the back of the device we can see a triple-camera array. This suggests either that rumors of a quad-camera setup – including a fourth time-of-flight (ToF) 3D depth camera – are wide of the mark, or that what we're looking at is the smaller 6.28-inch model, as claimed by WinFuture's Roland Quandt.

Samsung is said to be releasing a second, larger 6.75-inch Note 10 next month. If that model does include the quad-camera array with ToF, the company will be debuting the world-facing 3D depth-sensing tech a full year in advance of Apple, which is rumored to be introducing it in its 2020 ‌iPhone‌ line-up. If the bigger device additionally features 5G support (also rumored), that will be two tech flags that Samsung can raise at least one year ahead of Apple.

We can't see from these leaked images if the Note 10 is ditching the headphone jack, as has also been rumored. If so, users will have to decide for themselves whether that jives with Samsung's claim that these new devices are "designed to take the Galaxy ecosystem's connectivity to the next level." (Samsung famously killed the headphone jack in 2018's Galaxy A8s after years of mocking Apple for doing the same thing.)

In addition to debuting the Note 10, Samsung may also use its upcoming August event to provide more detail on when we can expect the delayed Galaxy Fold to launch. Samsung planned to release it earlier this year but then canceled its debut after multiple poor reviews from media sites.

We don't know exactly when Apple will unveil its own 2019 smartphone lineup, but based on past years, we can expect the Cupertino-based company to hold an event somewhere around the first or second week of September, with September 9 or September 10 being likely possible candidates.

Apple plans to offer its 2019 iPhones in three sizes, identical to the current ‌iPhone‌ lineup. The two higher-end devices will continue to use OLED, while the ‌iPhone‌ XR successor will feature an LCD and a cheaper price tag.

The ‌iPhone‌ XS and XS Max successors will use triple-lens cameras, while the XR successor will feature a dual-lens camera. The camera updates will be the biggest changes to the iPhones in 2019. As suggested, no 5G connectivity is coming this year, but faster WiFi and LTE is expected. For more on the 2019 iPhones, make sure to check out our roundup.

Samsung hasn’t been a threat to Apple in a long time.

You missed the point. Samsung might have stopped "copying" Apple because Apple is not trendy anymore.
Score: 16 Votes (Like | Disagree)

As an Apple investor, should one be relieved or concerned?

Calm down. Owning Apple stock isn’t rare or exclusive, nor does it subject the average owner of a few shares to any substantial financial risk.
Score: 15 Votes (Like | Disagree)

Rogifan
So it’s a piece of glass with a hole punch. Big deal. People aren’t upgrading phones as frequently because there’s no reason to. The number of people who care about notches, bezels and hike punches is incredibly small.
Score: 14 Votes (Like | Disagree)

Burger Thing
Samsung no longer copies Apple - they now copy Huawei. As an Apple investor, should one be relieved or concerned?:confused:
Score: 14 Votes (Like | Disagree)

Mike MA
Well, seems you decide of either having a chin and less secure finger print sensor, or a notch and Face ID. I chose the latter.
Score: 10 Votes (Like | Disagree)
Read All Comments