Monday July 8, 2019 3:45 am PDT by Tim Hardwick
Apple is testing a new way of signing into the iCloud website as part of its beta program for iOS 13, iPadOS 13, and macOS Catalina.

A tipster informed MacRumors over the weekend that users running a beta version of one of the above operating systems can now sign in with their Apple ID accounts using Face ID or Touch ID, depending on the device being used. 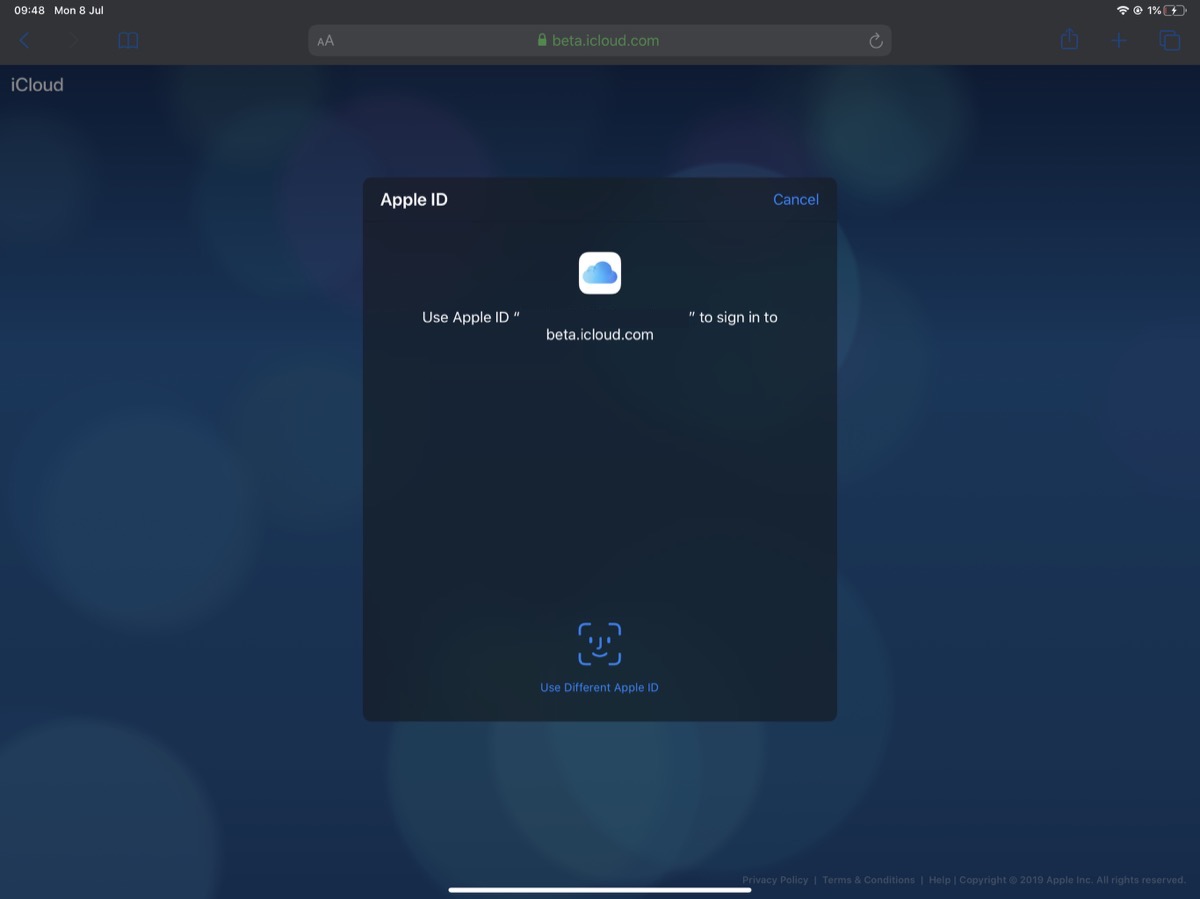 For instance, the screenshot above was taken in Safari browser on a 12.9-inch ‌iPad Pro‌ (3rd generation) running the latest ‌iPadOS‌ 13 Public Beta.

Visiting icloud.com, the user is redirected to beta.icloud.com and is then prompted to sign-in to the site using the Apple ID associated with the device.

Tapping "Continue" automatically signs in the user in a matter of seconds by activating the ‌iPad Pro‌'s Face ID authentication feature, meaning no Apple ID password input is necessary.

Users on devices with ‌Touch ID‌, including the 2018 MacBook Air and Touch Bar-equipped MacBook Pro models, are being met with a similar sign-in process that uses their fingerprint to authenticate without requiring two-factor authentication.

Apple's testing of this simpler way of signing in to the ‌iCloud‌ website is likely related to its forthcoming Sign In with Apple feature, which allows users to sign in to apps and websites using their Apple ID.

The feature is being touted as a more secure alternative to similar sign-in services offered by Facebook, Google, and Twitter, since it authenticates the user with Face ID or ‌Touch ID‌, and doesn't send personal information to app and website developers.

In an additional privacy boon, Sign In with Apple also lets users create a randomly-generated email address that hides their own email address when signing up for a third-party app or service.

The new sign-in feature is coming with Apple's new operating systems when they're released this fall and will be available across macOS, iOS, and through websites.

That means a MacBook with FaceID is just around the corner. That would be another price increase because according to Tim Cook that's a new feature.


Generally Mac prices are lower these days than they were under Jobs. If you don’t like it, you can use a PC or an older model. They don’t stop functioning when the new one comes out. Apple doesn’t owe you free stuff.
Rating: 3 Votes

How about they test a website that isn’t from 2012? Apple is seriously behind Google and Microsoft.


I work in Microsoft's cloud every day, not sure what you're getting at here but at least Apple's site is consistent and feels complete. M365, while more functional, can be a nightmare as it changes constantly.
Rating: 2 Votes

The iPad would run the desktop version of iCloud.com. Seems like that is what you would see. I guess this would be more applicable to iPad and touchbar MacBook users and not iPhone users.


I just tried it on the iPhone SE I'm using to play with iOS 13 public beta. And yeah, the TouchID authentication is cool but as you say, once you get into icloud.com on an iPhone you can only just use Find My iPhone ¯\_(ツ)_/¯

Still, it's very cool that Apple has worked out how to authenticate on a website using onboard biometrics. I could see this streamlining all kinds of interactions with Apple's websites.
[doublepost=1562643461][/doublepost]

It means your 2nd factor becomes your primary factor, a.k.a. Password-less login, which inherently offers more security than any flow with a password.

Eh, we're already there. If you're using a password manager like iCloud Keychain or 1Password, you're already logging into sites using only your fingerprint or face.

I rarely (thank god) type a password on my phone since iOS 12 introduced deep integration with 1Password. Is it technically less secure? I suppose, but if someone's cracked the biometric authentication on my phone I've probably already been owned ten ways from Sunday.
[doublepost=1562643568][/doublepost]

Strange. I access iCloud from iPad Pro 11” but I don’t see the new login prompt nor can I login to iCloud using password or so. I feel this feature is limited to 2FA users only.


Are you saying you somehow don't have 2FA on your iCloud account? Because that would be truly insane.
Rating: 2 Votes

My question is... What do you see once you sign in? Because Apple has never allowed you to see iCloud.com from an iOS device. Is it the full site?


On iOS, it just shows a web version of the “Find My” app, without an option to see / access anything else iCloud.
Rating: 2 Votes

newyorksole
My question is... What do you see once you sign in? Because Apple has never allowed you to see iCloud.com from an iOS device. Is it the full site?
Rating: 2 Votes

Does this mean 2FA isn’t required when using this methodology?

It means your 2nd factor becomes your primary factor, a.k.a. Password-less login, which inherently offers more security than any flow with a password.
Rating: 2 Votes

How about they test a website that isn’t from 2012? Apple is seriously behind Google and Microsoft.

As someone already mentioned it is at least consistent. Gmail compared to iCloud mail is a complete cluster****.
Rating: 1 Votes

joueboy
That means a MacBook with FaceID is just around the corner. That would be another price increase because according to Tim Cook that's a new feature.
Rating: 1 Votes