Apple is celebrating the United States' women's national soccer team victory in the 2019 World Cup with a Memoji-themed tribute on its Apple.com website.

USA defeated the Netherlands 2-0 in the World Cup Final on Sunday. The victory saw the holders retain the trophy and win it for the fourth time in the competition's history.

The animation finishes with the message of "Job well done," and then vanishes to return Apple's website to its usual style of showcasing the latest products.

Memoji and Animoji are limited to Apple's iPhones with TrueDepth technology, but in iOS 13, coming in the fall, Apple has added several different Animoji and Memoji stickers that can be used on all Apple devices with an A9 chip or later.

To learn more about how you can use Animoji and Memoji stickers in iOS 13, click here.

MrGimper
I'm sure, somehow, Ms Rapinoe will make this about her....
Score: 12 Votes (Like | Disagree)

Solomani
It's actually one of the best tributes that I've seen coming from Apple's home page. Sports is sports. The US women's soccer team were stellar. They deserve this kind of kudos, not just from Apple but from everybody.
Score: 11 Votes (Like | Disagree)

Is this on the Huawei site too?

allenvanhellen
Is this on the Huawei site too?
Score: 8 Votes (Like | Disagree)

lunarworks
Apple's Canada site had a splash of emoji when the Raptors won. 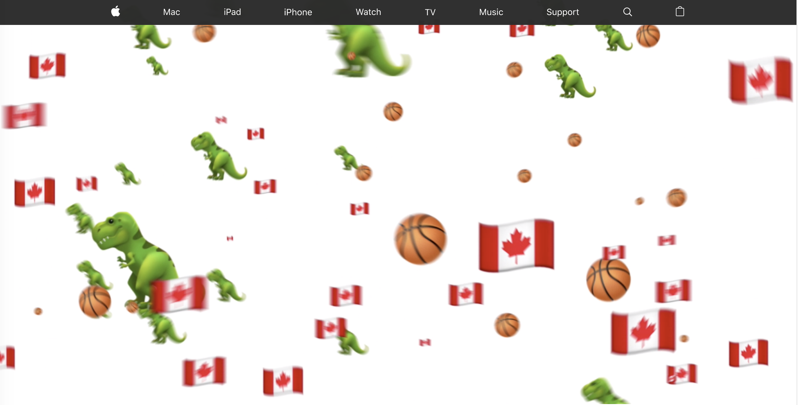 Nice, but that is a T-Rex not a raptor :p

Don't worry, I'm sure the 2020 release of emoji will have all the major dinosaurs.
Score: 4 Votes (Like | Disagree)
Read All Comments