macOS Catalina, currently available to developers and public beta testers in a beta capacity, revives the defunct Expansion Slot Utility app ahead of the launch of the Mac Pro.

The Expansion Slot Utility app is designed for managing and configuring PCI cards, and its return is clearly meant for the ‌Mac Pro‌, which has a total of eight PCIe expansion slots that Mac users can work with. 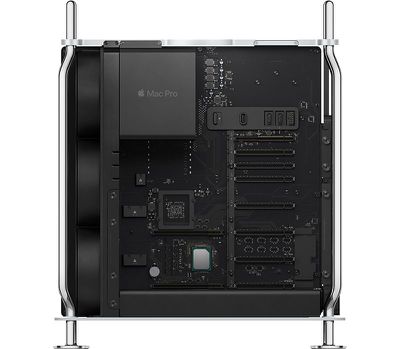 The Expansion Slot Utility app was discontinued years ago following the launch of the 2008 ‌Mac Pro‌ but the new 2.0 version is back for the modular ‌Mac Pro‌.

Darth Tulhu
Damn you Apple for pricing this thing out of my budget.

I love you Apple for building this thing and I want it bad.

Such is the war inside my head. The conflict. I am a Sith Lord after all. :p
Score: 12 Votes (Like | Disagree)

I've been using Macs for 2 decades now, never heard of this utility, tried to search on Youtube, nothing, it's says it's for configuring PCI cards, can someone tell me what to configure, I thought they were plug and play on a mac (after installing kexts).

The screenshots show it all. It's for allocating bandwidth. Seeing if your cards are getting the bandwidth they need, and managing what slots get how much bandwidth to the CPU/chipset.
It's very cool it can even be adjusted like this.
Score: 8 Votes (Like | Disagree)

BarredOwl
This machine is a day-one purchase for me. I really can't wait.
Score: 6 Votes (Like | Disagree)

I think the real baffling part is that you associate piracy with Hackintoshes. How does that work?

And I don't understand how you think Apple takes a financial hit when people build Hackintoshes. Next you'll be telling me that building your own Windows PC, or buying one, is a hit on Apple

Someone using macOS on non-Apple hardware is a clear violation of Apple's EULA, no matter how noble some thinks the cause.

People not buying a Mac, but instead building a PC and then installing macOS on it means that a potential sale of an Apple computer is lost.

Apple does not sell a license for its operating system for use on a PC the way that Microsoft does with Windows, that's the difference.
[doublepost=1562017421][/doublepost]

I guess this confirms for sure (as if it wasn't already obvious) that the new Mac Pro will not be able to run Mojave (and therefore legacy 32-bit apps).

Nope, of course that won't stop someone from trying to run some old 32-bit app that has never been updated, been abandoned or a newer version exists (with associated upgrade cost or subscription fee).

EDIT: And then getting on this site to bitch about it as if it is Apple personally screwing them over, but I digress.
Score: 5 Votes (Like | Disagree)

Damn you Apple for pricing this thing out of my budget.

I love you Apple for building this thing and I want it bad.

Such is the war inside my head. The conflict. I am a Sith Lord after all. :p

Exactly... I have the money but don't need it. I could justify buying the Mac Pro previously even though I didn't need it, but I am having a hard time doing that now. The only thing that might make me purchase this thing is if the upgrades aren't ridiculous, but that wouldn't be very apple like... the base config for that price is just ridiculous.
Score: 4 Votes (Like | Disagree)

Maybe the ability to use nvidia rtx cards etc?

No, no. This tool has nothing to do with support for the cards you might plug in. That's a matter of drivers.
This tool is just about bandwidth distribution. Making sure the cards you do plug in have the bandwidth to run at their best speeds.

But frankly I don't see this helping Hackintoshes at all. This is a tool that communicates with hardware, specifically the motherboard and its PCIe lane distribution chips. I find it hard to believe it'd work with any motherboard out there. Most motherboards don't even support distributing PCIe bandwidth like this, and have the lanes fixed to certain slots.
Score: 4 Votes (Like | Disagree)
Read All Comments