Apple today launched a new version of Logic Pro X, its music production and editing software designed for professionals. The new update includes performance optimizations that Apple says are designed to take advantage of the "groundbreaking power" of the upcoming Mac Pro. 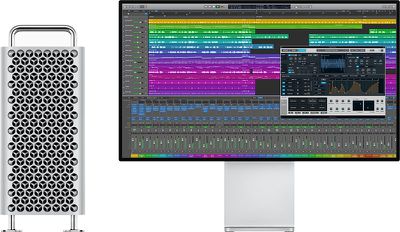 Apple says the ‌Mac Pro‌ with Logic Pro X 10.4.5 will allow pro musicians to do things that were never before possible. On the new ‌Mac Pro‌, Logic Pro X can run up to five times the number of real-time plug-ins compared to the previous-generation machine.

Logic Pro X 10.14.5 increases the available track and channel count for all users, maxing out at 1,000 audio tracks and 1,000 software instrument tracks, a 4x increase.

The new software also supports 1,000 auxiliary channel strips, 1,000 external MIDI tracks, and 12 sends per channel strip. Apple has also improved the responsiveness of the Mixer and Event list when working with large sessions, as well as projects with multiple time edits and tempo changes. Additional features are highlighted below:

- The loop browser can filter by loop type and allows drag and drop of multiple loops into your project simultaneously.
- The redesigned DeEsser 2 plug-in provides more options to reduce sibilance on audio tracks.
- MIDI beat clocks can be sent to individual ports, each with unique settings like timing offset and plug-in delay compensation

Apple's announcement includes statements from several composers and producers who are excited about the new ‌Mac Pro‌. "Black Mirror" composer Daniel Pemberton said time is "incredibly valuable" when working on scores for TV shows and movies, and that he's excited about the performance improvements coming in Logic Pro X 10.4.5 with the new ‌Mac Pro‌.

Oak Felder, producer for Demi Lovato, Drake, and Alicia Keys, said that it's clear Apple is committed to the pro community.

"As someone who uses Logic for everything I create musically, I got a huge kick seeing all the performance tweaks coming in Logic Pro X 10.4.5. And the expandability of the new Mac Pro will give it longevity and a home in my studio for a long time to come. It's clear that Apple is committed to the pro community, and I love that they are really listening and paying attention to our needs." -- Oak Felder, producer for Demi Lovato, Drake, Alicia Keys and Rihanna

Logic Pro X 10.4.5 is available today as a free update for all existing users, and new users can purchase it from the Mac App Store for $200. [Direct Link]

The new ‌Mac Pro‌, and its accompanying Pro Display XDR, will be launching sometime this fall.

Thank you Apple for your continuing neglect.

Very few musicians will be able to afford a Mac Pro.

A Pro deducts these purchases as professional expenses.

Thank you Apple for your continuing neglect.

It's a nice upgrade.

For professional musicians (not hobbyist), it's a business expense.

If the musicians can't afford it or the music is a hobby, the new Mac Pro is probably not for them.

In that case, Apple has other cheaper computer models or the musician can use a solution outside of Apple.
Score: 17 Votes (Like | Disagree)

plexdk
No more comments about Apple ignores the pros :p

Thank you Apple for your continuing neglect.
Score: 13 Votes (Like | Disagree)