Powerbeats Pro Launch Postponed Until July in Many Countries

Apple-owned Beats has delayed the launch of its totally wireless Powerbeats Pro headphones in select European and Asian countries. 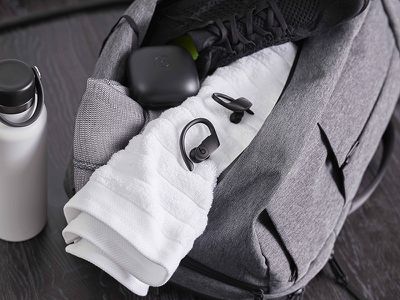 Powerbeats Pro orders will now begin in July in Austria, Brazil, Belgium, Hong Kong, Ireland, Italy, Japan, Korea, Mexico, the Netherlands, Russia, Singapore, Spain, Sweden, and Taiwan, according to fine print on the Beats website. The headphones were initially slated to launch in June in these regions.

As in other countries, the headphones will only be available in black at launch. Ivory, moss, and navy colors will be released later this year.

‌Powerbeats Pro‌ first launched in the United States and Canada in early May, followed by the United Kingdom, France, Germany, Australia, and China. Shipments are already considerably backlogged, with orders placed today on Apple.com estimated for delivery between June 28 and July 8 in the United States.


Like the Powerbeats3, the ‌Powerbeats Pro‌ feature adjustable, secure-fit ear hooks and earbud tips with four size options. They're essentially sportier AirPods, complete with a durable design and sweat resistance. They'll last up to nine hours per charge, with more battery life via an included charging case.

‌Powerbeats Pro‌ are priced at $249.95 in the United States and at €249.95 in most European countries, including Italy and Spain.

The postponed launch in Japan was first reported by Japanese blog Mac Otakara.

What makes these Pro? I have a hard time believing any wireless earbuds could qualify as acceptable for mixing and mastering audio in a studio.

Pro is a marketing term. But even if it wasn't, Pro doesn't mean only audio production. In the case of workout earbuds, this would be for athletes.

When Nike and Under Armour release professional grade trainers, nobody asks how they are for sitting at a desk.
Score: 9 Votes (Like | Disagree)

I disagree. While they are both fully wireless earphones, they have quite different use cases.

To me the essence of AirPods is their supreme portabilty and ease of use even for a brief period.
Score: 3 Votes (Like | Disagree)

velocityg4
What makes these Pro? I have a hard time believing any wireless earbuds could qualify as acceptable for mixing and mastering audio in a studio.
Score: 3 Votes (Like | Disagree)

If you disconnect them from your Apple account, they'll drain 0 percent. Leave them out of the case when you go to bed and turn the bluetooth off on the device they were connected to and see what the battery is at when you wake up. It's ridiculous that they drain the way they do.

While they're out of the case, the antennas are active and pinging for a wireless device, even if that device is unavailable, while they wait for the paired device to respond. While they are in the case, closed, the radios are turned off.

This behavior is expected and isn't that ridiculous.
Score: 2 Votes (Like | Disagree)

ck2875
They’re great for exercising and I’m happy I updated to them from my PowerBeats 2, but I’m considering buying a new pair of AirPods for my commute. I definitely see where there is room for them to coexist with AirPods.

The main issue with the PowerBeats Pro for me is the size of their case. If you’re going running or to the gym, it’s easy enough to leave it at home. Trying to use them when commuting, I don’t like having to figure out where to store the case. When it was cooler out it was easy enough to slip it in a jacket pocket. Now that it’s warmer I’m stuck awkwardly holding something about the size of a hockey puck.

On the other hand, I got a pair of AirPods in Dec 2016 and the battery in the individual earpieces are shot. The right ear lasts about 50 minutes until it beeps at me that it’s dying. The left ear lasts about 2 hours. While they’re definitely one of the more convenient things I’ve ever purchased, and I like them, I don’t know how I feel about buying another pair if they’re only going to last ~2.5 years.
Score: 2 Votes (Like | Disagree)

If I unpair them from my account, they dont ping constantly. The fact that they do that and never enter a real sleep mode when I have them on my account and bluetooth on my phone is off is beyond stupid. And when they're in the case, they're doing the same damn thing and draining the battery of the case in the process. It's moronic design to not allow the user the option to disable this in order to keep the batteries alive a lot longer.

They do sleep when they are cased, just like AirPods. But when they are not cased they do not sleep and they are waiting to be used - it doesn't get much simpler than that to an end user and some manual toggle would not offer any benefit to them.

AirPods will occasionally wake while inactive to update their devices available from iCloud (and do other sync related things) so I assume that the W1 works on the Pros works in the same fashion for those additional benefits you get.

Honestly, you're over here flipping tables for a nonissue. That's why no one is losing their minds. It's a good, well thought out product.
Score: 2 Votes (Like | Disagree)
Read All Comments