Hands-On With Cases Designed for the 2019 iPhone Lineup

Rumors about the iPhones coming in 2019 have been circulating since before the 2018 iPhones even launched, and at this point, we've heard quite a few details on what to expect.

Subscribe to the MacRumors YouTube channel for more videos.
Cases for upcoming iPhones often appear months before the iPhones themselves, and that's because there's a lot of money to be made being the first company out with cases designed for newly released devices.

Many of the renderings and part leaks that we see for new iPhones, the 2019 ‌iPhone‌ lineup included, come from case makers who pay people in Apple's supply chain for design information in order to create early versions of cases. More often than not, these super early cases are spot on, but there have been some major misses in the past. 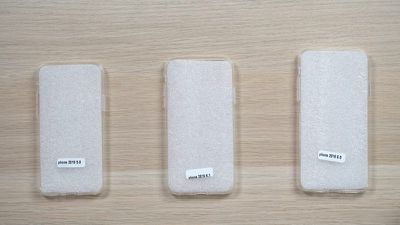 The 5.8 and 6.5-inch models will continue to offer OLED displays and will be positioned as the higher-end iPhones in the lineup, while the 6.1-inch ‌iPhone‌ is expected to continue to offer an LCD display and a lower price tag.

As you can see in the 5.8 and 6.5-inch cases, the next-generation ‌iPhone‌ XS and XS Max are rumored to include a triple-lens camera setup arranged in a triangular shape with an adjacent flash. This design requires a large square-shaped camera cutout for the cases, which looks quite obtrusive when seen in case form.

Apple's going to do what it can to minimize the look of the rear camera, which will still protrude, with rumors suggesting the rear panel will be made from a single pane of glass. This should make the camera bump blend in a bit better, so we can expect Apple's version to look better than renderings we've seen.

It's not really clear what capabilities Apple will add into a triple-lens camera, but at a minimum, we can expect a wider zoom range, better low light performance, more pixels captured, and a larger field of view. Given some of the highly touted camera features from Android phones, like the Night Sight mode on the recent Pixel devices, we can likely expect some similar features from Apple.

There could perhaps be a mode for significantly brightening up darker scenes, and Bloomberg has suggested Apple is working on a feature that will use extra pixel data to offer up tools for doing things like fitting in a subject that may have been cut off from an initial shot.

All of these cases have a large square camera cutout, but the successor to the ‌iPhone‌ XR isn't expected to have the same triple-lens camera setup. Instead, it's rumored to have a dual-lens camera, which is still an upgrade from the single-lens camera in the current ‌iPhone‌ XR.

In our testing, these cases fit the current iPhones perfectly with the exception of the new camera cutouts, as beyond camera tweaks, we're not expecting any major design changes. The 2019 ‌iPhone‌ lineup will look quite a lot like the 2018 ‌iPhone‌ lineup, but in addition to camera changes, Apple may also be planning a new frosted glass design for its OLED devices and new colors for the ‌iPhone‌ XR successor.

Rumors have suggested the new iPhones could be a tad bit thicker than the current models, but that's not noticeable with the cases and is such a small change that it may be imperceptible in real life. There are also some adjustments to button placement, so the buttons could be moved a bit.

There have been rumors that Apple's 2019 ‌iPhone‌ lineup will use a round iPad-style mute switch in a pill-shaped cutout instead of a traditional bar mute switch, which could account for some of the button differences.

Other rumors have indicated the 2019 iPhones will feature bilateral wireless charging (so you can charge your AirPods or other wireless devices), larger batteries, Lightning connectors, WiFi 6 for faster WiFi speeds, and an 18W power adapter for faster charging right out of the box.

What do you think of the design of the 2019 iPhones? Let us know in the comments.

(Thanks to Sonny Dickson for helping us get our hands on these cases!)

CrazyForCashews
Apple's design teams have been seriously lacking for the past few years now.
Score: 11 Votes (Like | Disagree)

jayducharme
Those phones are still too large. Let's hope the rumors of a new SE prove accurate!
Score: 9 Votes (Like | Disagree)

jml1982
I have a feeling I'm still going to stick with my iPhone 7 plus... I used to upgrade every year, but now I don't see the need, not enough features and exuberant prices.
Score: 9 Votes (Like | Disagree)
Read All Comments