PSA: 27-Inch iMac Appears to Have a Pricing Mistake

Apple updated its iMac lineup in March with new processor and graphics options, but the latest 27-inch model appears to have a pricing mistake. 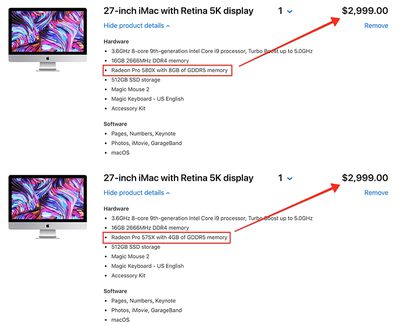 If you start with the $2,299 configuration and upgrade it with those exact same specs, the price also totals $2,999, but with Radeon Pro 580X graphics.

As best as we and the few readers who have tipped us about this issue can tell, there are no other differences between these configurations. As a result, an unknowing customer could end up paying $2,999 for the configuration with Radeon Pro 575X graphics when they could have had 580X graphics for the same price.

While this is a rather specific issue, we wanted to shine some attention on the matter so that others can avoid it, especially given that we have already received a few emails from readers about the matter.

We alerted Apple about this mistake, but they have yet to respond or correct the pricing.

jimothyGator
Apple will probably get this quickly resolved…by jacking up the 580X configuration by a couple hundred bucks.

We should just be grateful the iMac still comes with a stand.
Score: 42 Votes (Like | Disagree)

LoveToMacRumors
"We alerted Apple about this mistake, but they have yet to respond or correct the pricing."

TMRJIJ
What are you doing, MR?! Never draw attention to a pricing mistake, just go with it! Now, Apple is going to correct the 580X upgrade price by jacking the price!
Score: 19 Votes (Like | Disagree)

Oh great, the forum is going to be full of "jokes" about stands now aren't they...

Can we not get them banned mods?

Relax. It's comedy. Stand up comedy.
Score: 16 Votes (Like | Disagree)

BootsWalking
Maybe it's the same faulty logic that caused the new monitor stand to show up as $999 during the WWDC presentation. ;)
Score: 15 Votes (Like | Disagree)

We should just be grateful the iMac still comes with a stand.

You never know what you have until somebody takes it away and charges you $1000 to get it back.
Score: 12 Votes (Like | Disagree)
Read All Comments