Nearly two years have passed since Apple last refreshed the iMac, but updates are finally here for both 4K and 5K models. 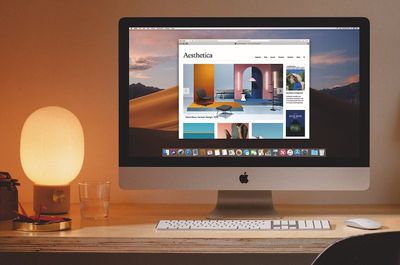 You'll of course have to pay to get peak performance, as processors range from a 3.6GHz quad-core 8th-gen Core i3 to a 3.7GHz six-core 9th-gen Core i5 in standard configurations of the new 4K and 5K iMacs.

Following in the footsteps of the 2018 MacBook Pro, Radeon Pro Vega graphics options are now available across the new ‌iMac‌ lineup, including Vega 20 for 21.5-inch models and Vega 48 for 27-inch models. Apple advertises up to 80 percent faster graphics performance compared to the previous ‌iMac‌ lineup.

The new ‌iMac‌ lineup offers up to 64GB of faster 2,666MHz DDR4 memory and up to 2TB of SSD storage. The base model 21.5-inch 4K ‌iMac‌ in particular has new 32GB memory and 1TB SSD upgrade options for the first time.

Beyond the performance improvements, there is a lot of familiarity. The new ‌iMac‌ models have the same design used since 2012 and the same 4K and 5K displays as the previous generation. I/O also remains unchanged with two Thunderbolt 3 ports, four USB 3 ports, a SD card slot, a headphone jack, and Gigabit Ethernet.

While the ‌iMac‌ Pro and the latest MacBook Pro, MacBook Air, and Mac mini models are equipped with Apple's T2 security chip, we've confirmed with Apple that the new ‌iMac‌ models do not have a T-series chip of any kind.

Customers are going to love the huge boost in iMac performance. With up to 8-core processors and powerful Vega graphics, the iMac lineup is stronger than ever. With its stunning Retina display, amazing design, twice the performance, and macOS Mojave that our customers love, iMac is by far the best desktop in the world.

The non-4K entry-level model 21.5-inch ‌iMac‌ was not updated today and remains available from $1,099.

I really don't get it. Either they leave really old slow 5400RPM drives in, or they go full blazing fast propriety SSD.... Why can't they put in SATA SSDs or fusion drivers where the SATA SSD is the small drive instead?

What don't you get? Do you really think the average consumer cares or can tell the difference between 5400, 7200, Fusion, and SSD?

The average customer absolutely knows that their computer is way too slow when it comes with a 5400 rpm drive. I support a few people that have them and the experience using these computers is terrible.
Score: 84 Votes (Like | Disagree)

arggg14
Wow this event in a few days is going to suck.
Score: 69 Votes (Like | Disagree)