Here Are All the Macs Compatible With macOS Catalina 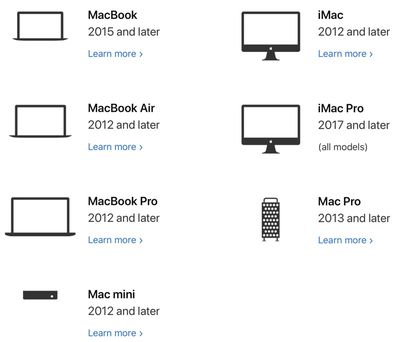 Compatible Macs are listed below:

These are all of the same Macs that were able to run macOS Mojave, with the exception of the mid-2010 and mid-2012 ‌Mac Pro‌ models, which will not be getting the update.

macOS Catalina is currently available to registered developers, who can download the software using the Software Update mechanism in System Preferences with the proper profile installed. Apple plans to make Catalina available to public beta testers in July, and the software will launch officially in the fall.

Shameful? Really, Shameful? No, the alternative is to dwell in stale software, and there would be more complaints about that. If you use the machine for business, it is time to upgrade. Keep your computer up to date, keep your business up to date. Hanging on to older CPUs is not a good business strategy.

A 2010 Mac Pro has more than enough power to run the upcoming version of Mac OS, and quite likely any system software Apple releases for the next two decades. I know the 80s and 90s had us replacing our computers every few years, but we've hit a relative plateau over the past decade, and claiming that an 2010 8-core Xeon can't run what a 2017 dual-core i5 can is just disingenuous.

I'm not saying don't innovate or update. But I despise the throwaway culture we live in. I'm in the small minority, but I'd like to see computers (especially one's that cost more than $1000) come to be viewed as appliances more than apparel (think about it). When I buy a refrigerator, a couch, or a car, I expect it to last me 15-20 years. I will pay for quality engineering, but in return I'll determine when to EOL my property.

This is the philosophical problem I have with Apple and most other companies in the hardware and software industries. Most people don't seem to notice (or mind) that they're being fleeced, and the analogy of the frog in the boiling water is not out of place here.
Score: 10 Votes (Like | Disagree)

trusso
Bad form, Apple. I know you've just released a new Mac Pro (albeit, one that's out of the ordinary user's price range), but for those who just upgraded their 2010-2012 cMP graphics cards last year with the expectation of a few more years of updates... :oops:

What is? This is the same list of Macs that can run 10.14 Mojave. Unless I missed something.

You didn’t miss anything.

Some people just need to find something to grumble about.
Score: 8 Votes (Like | Disagree)