The updates start at the new Home screen, which Apple said is "designed for discovery." Apps on the dock can now play full-screen video previews on the Home screen, instead of just showcasing still images. 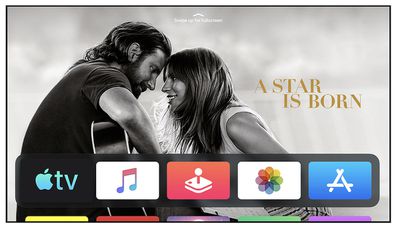 The big new addition to ‌Apple TV‌ with tvOS 13 is support for multiple user profiles on the new ‌Apple TV‌ Control Center. With this feature, you can easily switch between family members and change entire aspects of the operating system depending on who is using it.

This means that individual family members will have their own Up Next list in the TV app, see their own TV and movie recommendations based on their tastes, and also receive their own curated suggestions in ‌Apple Music‌.

In regards to ‌Apple Music‌, Control Center will also include quick access to the currently playing song. A new lyric feature has been added as well, which showcases onscreen lyrics timed in sync with the track.

tvOS 13 is also adding support for the Xbox One S controller and the PlayStation DualShock 4 controller. This way, users who already own one of these controllers will be able to play a wide variety of games on the tvOS App Store with ease. It'll also enhance games available on Apple Arcade when that service launches in the fall.

Lastly, ‌Apple TV‌ 4K devices will gain new 4K HDR screen savers that were filmed in collaboration with the BBC Natural History Unit. These screen savers are focused on underwater locations and showcase the depths of the oceans around the world.

farewelwilliams
Us 5 years ago:
"WE WANT MULTIUSER SUPPORT ON IPAD"

Dimwhit
Auto-play trailers? Way to take the worst feature of Netflix and implement it, Apple. Hopefully at least Apple will let us turn it off.
Score: 13 Votes (Like | Disagree)

Conspicuously missing... any mention of "Computers" (even in the below-the-fold icons) or Home Sharing. Home Sharing not mentioned in any materials related to iTunes split-up either (that I've found).

Computers App is still in TVOS 13
Score: 8 Votes (Like | Disagree)

spinedoc77
Multi user is awesome, finally I can install youtube back onto my Apple TV and let my kids log into a different account. What boggles my mind is how we still don't have multi user support for iOS. Both TVOS and iOS continue to need more parental controls.
Score: 7 Votes (Like | Disagree)

Auto-play trailers? Way to take the worst feature of Netflix and implement it, Apple. Hopefully at least Apple will let us turn it off.

I would be also interested to know if these can be turned of. Really that them on Netflix
Score: 4 Votes (Like | Disagree)

I’ve seen from the Catalina beta. Home Sharing does still exist. It’s now activated in Settings> Sharing Tab and now called Media tab. With the separate apps you can now specify what type of Media library you want to share. So I am expecting the Computers app still exists unless they roll it into the TV app.