A video of a smoking MacBook Pro is gaining attention on Twitter and Reddit after being shared by a DJ known as White Panda, who claims that the notebook suddenly "exploded and burst into flames" on Tuesday during normal use. The cause is unconfirmed, but a failed lithium-ion battery is likely to blame. 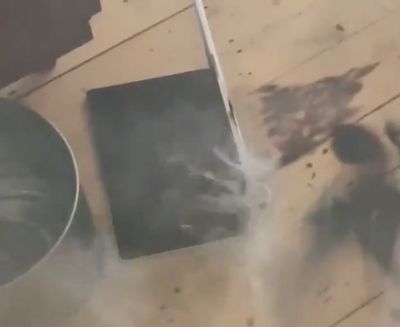 Yesterday afternoon my MacBook Pro exploded during normal use. It was on my lap, plugged in, and suddenly started to spew smoke out both sides. I quickly placed it on the floor where it popped, the smoke increased, and it caught fire. Toxic smelling smoke filled my house triggering smoke and CO alarms. No one was injured, thankfully, but there was some damage to my home.

The MacBook Pro is a 2015 model with a 15-inch Retina display, according to White Panda. Two repairs to the MacBook Pro's display and trackpad were completed by Apple under warranty during its lifetime, but the notebook has never had any third-party repairs and has no aftermarket parts, he says.

My MacBook Pro exploded today during normal use. No injuries, luckily. Some damage to the house. Could have been worse - good thing I wasn’t on a plane. Very curious to see how @Apple responds.@MacRumors @TechCrunch @9to5mac pic.twitter.com/pjmpv5Mx9b — White Panda (@whitepanda) May 29, 2019

After allowing the MacBook Pro to cool down for roughly an hour, White Panda says he took the notebook to an Apple Store, where employees allegedly placed it in a fireproof safe for 24 hours as a mandatory safety precaution.

Apple has since "escalated" the matter and said it would be in touch within five days, according to the DJ. Apple has yet to respond to our request for comment, but the MacBook Pro will likely be sent to Apple's headquarters in Cupertino to be investigated by its product engineers, as is typical in these situations.

While unfortunate and dangerous, this is an isolated incident. The reality is that Apple produces millions of lithium-ion batteries, and while they are typically safe, a very small percentage may experience failure.

We'll update this article if we hear back from Apple or learn any additional details.

Not really. This was a one-off issue with one specimen from a single skew that came about 4 years after manufacture. Samsung's issue was a fundamental design flaw in an entire line of products with hundreds exploding, often violently.
Score: 25 Votes (Like | Disagree)

You 100% do have a fire hazard on your hands. It also probably damaged the computer once it swelled that much.
Score: 7 Votes (Like | Disagree)

Replace that battery. To to apple.com and book that appointment now. That is absolutely a fire hazard, and not being one will probably add more to the resale value than the cost of the repair.
Score: 6 Votes (Like | Disagree)

We can absolutely make fun of Samsung for one simple fact that escapes you:

Lithium batteries catch fire. The failure rate for lithium batteries is extremely low. The reason the Note 7 was such a complete and utter disaster for Samsung was because those batteries had failure rates between 100 and 1,000 times higher than normal.
Score: 6 Votes (Like | Disagree)

That's not a good look. What model was it?

ijlakw
I have a 2013 rMBP and the battery has swelled to the point where the case will not shut. I am more than a little concerned now that I have a fire hazard on my hands.
Score: 5 Votes (Like | Disagree)
Read All Comments