Apple may have discontinued its solid gold Apple Watch Edition back in 2016, but that hasn't stopped some keen do-it-yourselfers from filling the void. 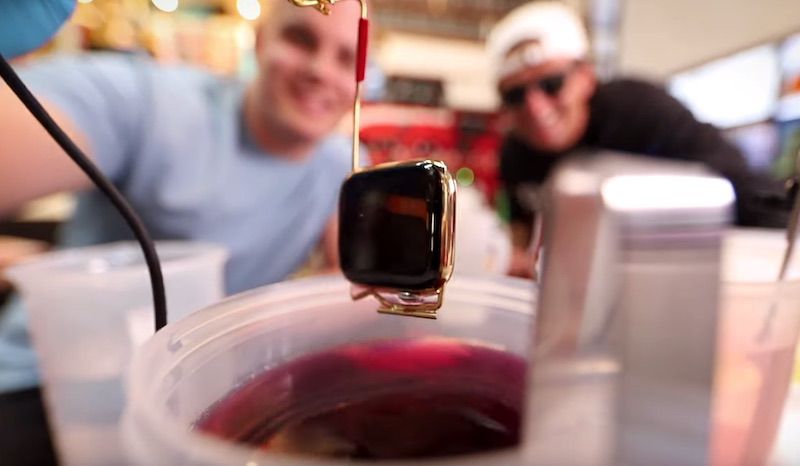 YouTube stars Casey Neistat and JerryRigEverything's Zack Nelson have teamed up to dip an Apple Watch Series 4 in 24-karat pure gold -- the ‌Apple Watch‌ Edition used 18-karat gold for comparison, but it was solid, not just plated. Bonus: unlike the $10,000-and-up ‌Apple Watch‌ Edition, this one can even run watchOS 5.


The process involved placing the ‌Apple Watch‌ in an electro-cleaner solution to make it hydrophilic, dipping it in an acid solution to etch the chrome out of it, priming it with some gold filament, and then placing it in the gold-plating solution.

For the rest of us, gold-tinted aluminum or stainless steel options will have to suffice.

Amacfa
Why is that guy wearing sunglasses in an indoor video? He doesn’t realize how dumb it looks? This is insufferable.
Rating: 15 Votes

As are most things done on YouTube :D
Rating: 13 Votes

Kabeyun
Chemists reading this thread must be having a conniption at the inaccuracies in this video and this report, starting with the fact that the watch is not being “dipped in liquid gold.” This is garden variety electroplating, which they do state in the video, but “dipped in liquid 24 karat gold,” even though wrong, sounds so much more clickworthy.
Rating: 5 Votes

fel10
The guy made the video almost unwatchable
Rating: 5 Votes


Not sitting through nine minutes to find out why. Nobody on YouTube can "get to the pernt"...

Can somebody summarize?
Rating: 5 Votes

Why is that guy wearing sunglasses in an indoor video? He doesn’t realize how dumb it looks? This is insufferable.

he vlogs. and the camera he uses has a flip out screen which he watches all the time as he's filming, to monitor focus and exposure (vs. looking at the lens). The glasses hides this and so makes the audience think hes looking directly at them at all times. Overtime, it's become his trademark look.

hate vloggers all you want. he's achieved more success (and money) as a vlogger through youtube than millions of other artists in many people's definition of a more "respectable" medium.

all power to him.
Rating: 5 Votes

Why is that guy wearing sunglasses in an indoor video? He doesn’t realize how dumb it looks? This is insufferable.

hate vloggers all you want. he's achieved more success (and money) as a vlogger through youtube than millions of other artists in many people's definition of a more "respectable" medium.


I don't hate vloggers. More like pity for a generation or two who are no longer capable of ingesting the written word. And, yes, a bit of contempt toward those who exploit them by d r a g g i n g o u t their "instructional" videos to extract the maximum $ from YouTube.

I don't know how one learns like this. It has to take forever. I have a younger friend who can only learn from video. Somehow, he got through college, I don't know how. But if he wants to learn something on his own, YouTube is his first choice.

I don't have the patience.

I did use YouTube to see how to replace a bathtub shower cartridge a while back. I skipped to the last of *FOUR* videos to where the guy got to the pernt. The first 3 were blah, blah, blah, follow me, wear safety glasses, turn off the water coming into the house...

I do have a favorite vlogger, though. Can't get enough of the Hydraulic Press Channel.