Apple Pay officially launched in Hungary and Luxembourg today, enabling bank card holders there to use Apple's mobile payment system for iPhone, iPad, Mac, and Apple Watch wherever they see the contactless logo. 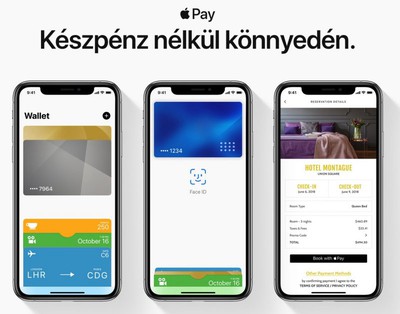 The expansion within Europe follows the launch of ‌Apple Pay‌ in Iceland earlier this month. Elsewhere, regional banks in The Netherlands and Portugal have teased that Apple's contactless payment system is "coming soon."

Apple CEO Tim Cook said in March that ‌Apple Pay‌ would be available in more than 40 countries and regions by the end of 2019, so the rollout is well on track, although Apple's website has yet to be updated with the full list. ‌Apple Pay‌ first launched in the United States in October 2014.

Yes which makes you wonder, why? Nearly 5 years and it is still not a Global Roll Out.

Wondering if you have any idea how this works...
Score: 6 Votes (Like | Disagree)

The rate of Apple Pay rollout really shows the Euro-peons how much Apple cares about them. It's like getting the leftovers from the US table, with the choicest bits always going to the UK and Nordic countries first. What about Apple Pay Cash? Expected to launch before or after 2025? At the same time Apple keeps sucking up to the Chinese market which basically does not care about Apple services – e.g. iPhone users don't know what iMessages are, Apple Pay was a giant flop, everyone's just constantly using a smartphone emulator app called WeChat and people only buy Apple gadgets for bragging rights.

Bit unfair to put the blame solely on Apple while European banks are at least as much to blame for the slow rollout.
Score: 4 Votes (Like | Disagree)

Apple Pay is on fire recently.

Yes which makes you wonder, why? Nearly 5 years and it is still not a Global Roll Out.
Score: 3 Votes (Like | Disagree)

Hungary is very poor, they need this really?
The most of the iOS user base is come from low class people there, they even take bad “rip-off” loans just to have an iPhone.

Have some respect for a beautiful country, with lovely people that meets all european standards. Budapest is a world class city and the entire country is full of history and culture.
Score: 3 Votes (Like | Disagree)