Apple has informed its retail staff that it will substitute some Apple Watch Series 3 repairs with the Apple Watch Series 4, due to low inventory on the older model. The announcement was spotted by an internal memo delivered to staff and Authorized Service Providers, seen by 9to5Mac. 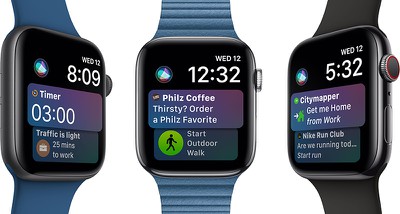 Now, customers looking for a repair or replacement of the stainless steel Apple Watch Series 3 with GPS and cellular, can instead receive the stainless steel Series 4 model with GPS and cellular. The change is said to apply to Apple retail stores and ASPs globally, but it's unclear at this time if the Series 4 upgrades are a permanent solution to the Series 3 shortages.

To initiate a repair, head to the Get Support page on Apple's website and book an appointment with an Apple Store or Apple Authorized Service Provider. As usual, it's not guaranteed that all locations will acknowledge existence of this internal policy, especially given that there is no definitive end date, so your mileage may vary.

benshive
And suddenly a bunch of Series 3 owners "accidentally" drop their watch down the stairs ;)
Score: 18 Votes (Like | Disagree)

AngerDanger
No way in hell anybody is replacing my trick Apple Watch! :mad:

ilikewhey
this is why i like being an apple customer, replace with equal or better, you try that with bestbuy and they will just laugh at your face.
Score: 6 Votes (Like | Disagree)

zed1291
Please note: there is absolutely no way for an Apple employee to know 100% whether or not your Apple Watch will be replaced with the exact same model or the upgraded one prior to sending it to the offsite repair facility for replacement.

After it’s been sent out and you find out it it’s the same or newer generation, it’s not possible to retrieve the original watch back.

It’s best to assume you’re getting the same watch, and be surprised and delighted if it does happen to be upgraded.
Score: 4 Votes (Like | Disagree)

gigapocket1
Anyone know how to brick a watch lol
Score: 4 Votes (Like | Disagree)

Mizouse
I wonder if anyone has successfully had their 1st generation Apple watches replaced up to a series 4. o_O
Score: 4 Votes (Like | Disagree)
Read All Comments

Wednesday June 16, 2021 7:11 am PDT by Hartley Charlton
With no sign of redesigned MacBook Pro models at this year's WWDC, when can customers expect the much-anticipated new models to launch? A number of reports, including investor notes from Morgan Stanley and Wedbush analysts, claimed that new MacBook Pro models would be coming during this year's WWDC. This did not happen, much to the disappointment of MacBook Pro fans, who have been...
Read Full Article • 226 comments

Wednesday June 16, 2021 10:49 am PDT by Juli Clover
Apple CEO Tim Cook this morning participated in a virtual interview at the VivaTech conference, which is described as Europe's biggest startup and tech event. Cook was interviewed by Guillaume Lacroix, CEO and founder of Brut, a media company that creates short-form video content. Much of the discussion centered on privacy, as it often does in interviews that Cook participates in. He...
Read Full Article • 315 comments

Thursday June 17, 2021 7:33 am PDT by Joe Rossignol
Apple today lowered the prices of AppleCare+ plans for MacBook Air and 13-inch MacBook Pro models equipped with the M1 chip. Coverage offered by the plans, as well as accidental damage fees, appear to remain unchanged. In the United States, AppleCare+ for the MacBook Air now costs $199, down from $249. The new price applies to both M1 and Intel-based MacBook Air models, although Apple no...
Read Full Article • 129 comments