As of March 30, 2019, the U.S. ‌iPhone‌ use base hit 193 million units, compared to 189 million units at the end of the December quarter, marking two percent growth quarter over quarter. 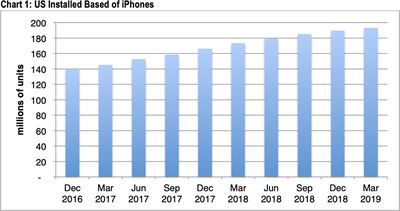 Apple's ‌iPhone‌ user base was at 173 million units at the end of the March 2018 quarter, for year over year growth of 12 percent, which is not bad, but not quite hitting the growth rates of prior years.

"The US installed base of iPhones continues to plateau," said Josh Lowitz, CIRP Partner and Co-Founder. "Relative to the most recent quarters, and especially to the past two or three years, slowing unit sales and longer ownership periods means that the growth in the number of US iPhones has flattened considerably. Of course, 12% growth in a year, after years of much greater growth is still good. However, investors grew accustomed to quarterly growth of 5% or more, and annual growth of almost 20%. This continuing trend prompts investors to wonder if iPhone sales outside of the US will compensate, and places greater pressure on Apple's determination to sell other products and services to the installed base of iPhone owners."

CIRP's estimated U.S. ‌iPhone‌ installed base is based on estimated worldwide ‌iPhone‌ sales of 39 million, calculated from Apple's ‌iPhone‌ revenue and average ‌iPhone‌ selling price for the quarter ending in March 2019.

‌iPhone‌ sales have slowed down, and in January, the decline in sales over the holiday period led Apple to make the rare move of lowering its expected revenue guidance. Apple also saw a dip in revenue in the second fiscal quarter (first calendar quarter) of 2019, bringing in $58 billion, compared to $61.1 billion in the year-ago quarter.

Apple has never provided a specific breakdown of the number of active devices in the United States, but earlier this year, the company said there were 1.4 billion active devices around the world. 900 million of those devices are iPhones.

smaffei
Considering that there is 327 million people in the US. 50 million are 11 years old or below (don't know many people who are buying phones for their 9 year old).… That means roughly 70% of the phone buying population in the US owns an iPhone. I don't think you can expect bigger increases after hitting that landmark.
Score: 43 Votes (Like | Disagree)

That means roughly 70% of the phone buying population in the US owns an iPhone.

That's not a conclusion that you can reach based on the data provided. It would be like saying Apple has over a billion active devices worldwide therefore they have over a billion users worldwide.
Score: 17 Votes (Like | Disagree)

now i see it
There's a finite number of people who can afford these things.
Score: 16 Votes (Like | Disagree)

For the average consumer, what does Apple have that the competition sorely lacks nowadays? Having FaceID did not make consumers switch to an iPhone. My phone does not have the feature, but if it did it will be the first thing to disable/bypass. A passcode is more secure than a thumbprint or FaceID. Think about it for a minute!

For the average consumer:

3. Outstanding premium devices that many millions of satisfied repeat customers are willing to open their wallets and purchase year after year after year.

That's just a few that quickly come to mind.
Score: 14 Votes (Like | Disagree)