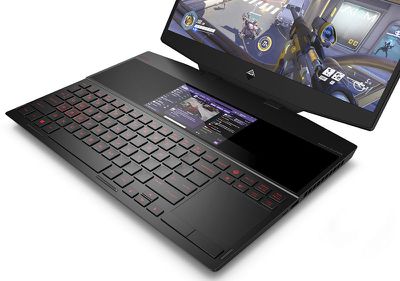 Like the Touch Bar on recent MacBook Pro models, the second screen on the OMEN X 2S is designed for multitasking. For instance, while gaming, players could use the screen to message teammates in Discord, browse music on Spotify, or stream Twitch or YouTube, complete with support for dedicated hotkeys.

One compromise of the second screen is that the trackpad is positioned to the right of the keyboard, rather than in a center position, but HP believes that most gamers would prefer using their own mice, according to Engadget.

As far as specs go, the OMEN X 2S is equipped with up to a ninth-generation Intel Core i9 processor, up to NVIDIA GeForce RTX 2080 graphics, up to 2TB of SSD storage, and up to 32GB of DDR4 RAM. The notebook uses an advanced thermal solution with three-sided venting to enable five-way airflow.

The notebook is 20mm thick with a full metal chassis, but weight and battery life have yet to be disclosed. HP expects the OMEN X 2S to be available by June, with a starting price of $2,100 in the United States.

Simplifier
This seems so useless I don't even know where to start. Complexity precedes simplicity, it doesn't follow it.
Score: 16 Votes (Like | Disagree)

thejadedmonkey
Because comparing Apple's **** implementation to a legic second screen makes sense. I'm not sure why you even bother to try and make the touchbar look good, MR.

Plenty of PC gamers use a 2nd screen for YouTube or Spotify; this is an obvious feature to add.

I can't think of any professional users who ever went "Hey, I know, lets get rid of the [ESC] key!"
Score: 12 Votes (Like | Disagree)

alexandr
to the horribly ugly level.
Score: 11 Votes (Like | Disagree)

This seems so useless I don't even know where to start. Complexity precedes simplicity, it doesn't follow it.

That you don’t need it doesn’t make it “useless.”
Score: 8 Votes (Like | Disagree)

Because one thing hard-core gamers (the target customers for these machines) have yearned for is the ability to play Spotify and stream YouTube videos while fully concentrating on mowing down their opponents?

You have not met my son, he's got three monitors, the middle one is the game, the left is you tube and the right is chat of some description.
Score: 7 Votes (Like | Disagree)
Read All Comments

Wednesday June 29, 2022 4:43 am PDT by Sami Fathi
Fifteen years ago to this day, the iPhone, the revolutionary device presented to the world by the late Steve Jobs, officially went on sale. The first iPhone was announced by Steve Jobs on January 9, 2007, and went on sale on June 29, 2007. "An iPod, a phone, an internet mobile communicator... these are not three separate devices," Jobs famously said. "Today, Apple is going to reinvent the...
Read Full Article • 215 comments