Adobe is now accepting applications to a beta version of its forthcoming Photoshop CC for iPad app, due to be released later this year. 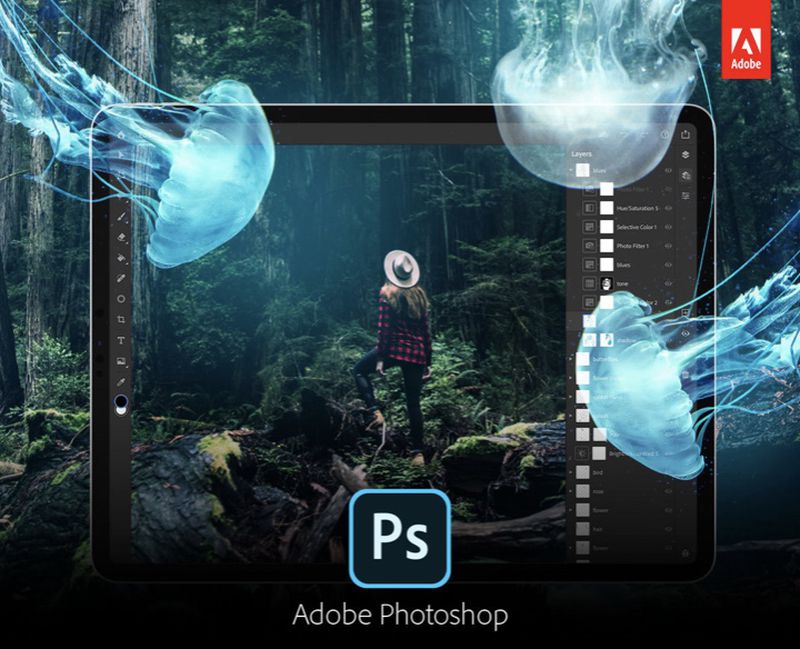 The company has been sending out emails to Creative Cloud subscribers since Monday, inviting them to apply for the beta program and be among the first to try "Photoshop for the small screen."

CC customers who click the link in the email are sent to a Google Forms signup page where they're asked to enter their name, email address, and offer a brief explanation as to why they're interested in testing the beta.

Photoshop users will be able to open and edit native PSD files right on the ‌iPad‌ using standard Photoshop image editing tools, including support for layers. Photoshop on ‌iPad‌ will look similar to Photoshop on the desktop, with all of the same toolbar options.

The ‌iPad‌ version of the app will allow projects started on the ‌iPad‌ to be transitioned seamlessly to the desktop and vice versa. According to Adobe, Photoshop for ‌iPad‌ uses the same code base as its desktop counterpart with no compromises on power, performance, or editing results.

Adobe is two years late. Who’s going to use this over Affinity Photo?


I agree, personally i prefer Affinity Photo and Pixelmator Pro. I don't want or like the idea of paying monthly for Photoshop.
Rating: 4 Votes

allenvanhellen
Get it fast to avoid being sued!
Rating: 4 Votes

Adobe is two years late. Who’s going to use this over Affinity Photo?


Uh, all the professionals who ALREADY use Photoshop?

While I agree Apps like Affinity and Pixelmator are great, people invested in Photoshop aren’t going to switch.

jagolden
Way, way too late. Adobe who?
And the fact that after two years this is only a preview (read "not ready for prime time") is an insult to users.
[doublepost=1557854855][/doublepost]

Uh, all the professionals who ALREADY use Photoshop?

While I agree Apps like Affinity and Pixelmator are great, people invested in Photoshop aren’t going to switch.

It’s nice to have choice.


Uh, many have switched, especially where AP opens native PS files.
This is what Adobe relies on, the fear people have of making a switch. This is what QuarkXPress did and look at them now - practically an also-ran.
I’ve been invested in Photoshop and Illustrator since 1989/1988 respectively. When I retired I immediately went over to AP and AD.
Rating: 2 Votes

Who’s going to use this over Affinity Photo?


The seamless ecosystem synchronization cannot be understated. Lightroom <-> Lightroom Mobile sync is what keeps me from Capture One. It's just too good.

Also, I have several Photoshop plugins that don't work in Affinity.

Uh, many have switched...


Cool? He said "the professionals who ALREADY use Photoshop," specifically referring to those who haven't. And there are a lot. I'm a professional photographer and I don't think I know anyone personally who is is primarily using a PS competitor over PS. It may certainly be different in other industries. A big part of this is probably that Lightroom, Photoshop, and Bridge are in a $10/mo bundle. There's no reason not to use PS.
Rating: 1 Votes

Get it fast to avoid being sued!

That does not avoid it.
Rating: 1 Votes

BWhaler
Too many viable competitors at this point.
Rating: 1 Votes

And the fact that after two years this is only a preview (read "not ready for prime time") is an insult to users.

Beta testing a major new version of an app on a new platform is an insult to users. Okay....
Rating: 1 Votes
[ Read All Comments ]