You can now choose to delete your information manually, every three months, or every 18 months. With these settings enabled, Google will regularly clear out your data at the three month mark or the 18 month mark. 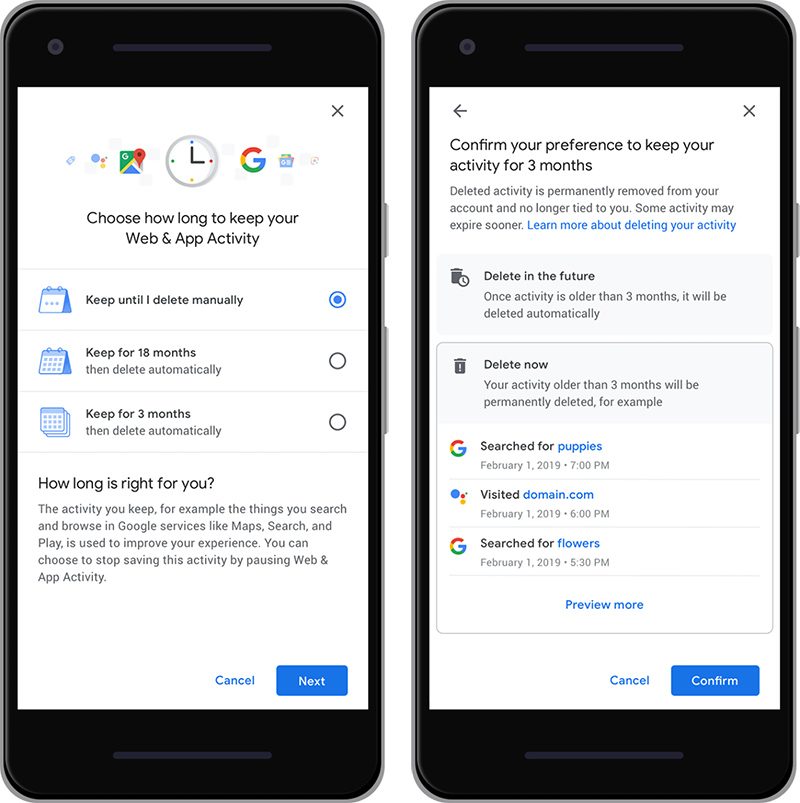 Prior to this change, Google allowed Location History and Web & App Activity to be disabled or manually deleted, but there were no controls for regular deletion, which may encourage more people to use these features.

Google says the new controls for Location History and Web & App Activity will be rolling out "in the coming weeks," and has suggested the auto-delete functionality will be coming to additional features in the future.

Antes
Almost pointless... it’s ‘deleted’ for you- not them.
Rating: 18 Votes

WBRacing
The wording is pretty clever, "is permanently removed from your account". Not deleted, "removed", as in no longer accessible.

Whilst I am currently happy to use Google and benefit from the services they provide me, if I choose to delete my data I definitely want to know that the data has indeed been deleted. That's not a delete, just a disconnect.
Rating: 12 Votes

warp9
I don't have a problem with Google having my data. Their only purpose for it is to try to sell me something I was probably going to buy anyways. Of all the things to be outraged about, shopping is not it.

What DOES worry me is what might happen with that data in the future. There's a real chance of discrimination rising up. Medically, socially, culturally, really anything.
Rating: 2 Votes

coolfactor
Is it me, or does this article completely omit the app that's involved here? Are we talking about Chrome on iOS? Or all Google apps across the device? It's really unclear to me.

UPDATE - Even the original article by Google on this topic doesn't make it clear where you actually access these controls. Is this at the Google website when you're logged into your account? Why is it showing it on a mobile device? Makes it look like an app interface.

UPDATE #2 - I suspect this is what you see when you log into your Google account on a mobile device. Just poorly presented here and by Google.
Rating: 2 Votes

NickName99
Bravo! I avoid Google products as much as possible, because of their shady privacy policies. This is a positive step. I agree with others that Facebook ought to follow this example, if they want to stop hemorrhaging users.
Rating: 2 Votes

warp9
I went through every item in that Guardian articles list and all I saw was things I want Google to have. I have never used Facebook so there's nothing there (or not much).

- Search history: I intentionally keep history running for as long as possible. I can search keywords from some obscure page I was at years ago that I can't remember anymore. Very handy many times already. It also keeps every result on the first search page relevant. I did a Google search once while signed out and the results were terrible.

- Location history: Mine is blank, don't know why. I've never used an Android device and almost never use Google Maps so maybe that's why.

- Youtube history: This is just as valuable as search history. Sometimes my history is the only place I can find that one video I saw and want to go back to.

- Emails: Why would I not want to keep email history? My gmail archive goes back 20 years and I like it that way. I don't have deeply personal conversations over email anyways.

Ok I sound like a shill for Google now, but it's all true. Like I said, I can't think of any dangerous things they would do with it but I'm willing to change my mind.
Rating: 1 Votes

I've tried to think of something else they would do with it but Google derives something like 95% of their revenue from ads. There doesn't seem to be any incentive for other uses.

If you have any ideas, please, let me know. I've been looking for an excuse to go off-grid and off-line, John Conner style.:cool:


To Google we are a mere GUID. My understanding is that based on some cunning algorithms they use data associated to that to target adverts.

Currently though these ads show me (or used to until I disabled the most obvious trackers) just what I had been looking recently, like the night before.

"The Hotel Giraffe in NYC only $299 with Expedia". If I didn't book it last night, I am definitely not doing it just because a picture has appeared next to a news article today. :rolleyes: Seems to me that ad tracking suggestions are so lame and obvious, right now I have little to be scared about with them using my data for anything else...

Seriously though, the paranoia being expressed about Googles data tracking has never been backed up by any real examples of things I should be worried about. Facebook to me is infinitely more worrying as it has been proven their data has been used for dodgy purposes. Also they happily share data to the highest bidder and track data and information on people who don't even have accounts! How that is not a crime I do not know.

Seems to me as long as my identity isn't being stolen, there isn't that much else right now for me to worry about. I read news from various websites and not curated feeds so don't have my opinions swayed. News aka."opinion" papers already exist anyway so that's nothing new.

If as in iRobot it comes to pass that I have a robot in my house controlled by a centralised computer, then I might well look to change that opinion.
Rating: 1 Votes
[ Read All Comments ]