Apple has launched a new YouTube channel that's dedicated to its TV app, offering up trailers, behind the scenes commentary, interviews, show clips, and more.

Apple appears to have debuted the new channel, which was noticed this morning by MacStories, about a month ago. The channel seems to have launched when Apple announced plans for a revamped Apple TV app and a new Apple TV+ streaming service. 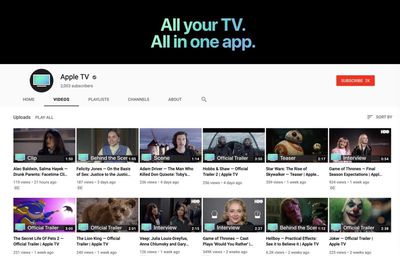 Quite a few videos have been uploaded, many of which are clearly labeled with titles like "Official Trailer," Interview," or "Clip."


Trailers for many popular upcoming movies are included, such as "The Lion King," "The Secret Life Of Pets 2," and "The Joker," along with clips and interviews from "Game of Thrones," "Veep," and more.
The channel features trailers for Carpool Karaoke: The Series, which suggests this is where Apple will share trailers for its original TV shows and movies as the Apple TV+ service's fall launch approaches.

Apple's updated TV app is already available to developers and public beta testers who have installed iOS 12.3 and tvOS 12.3, and it will be available to everyone when those operating system updates launch.

It appears that the ‌Apple TV‌ channel will be used in conjunction with the revamped TV app to promote television content that's available to watch through the TV app.

trainwrecka
I just want my old iPod and Videos apps back. It used to be so easy to navigate and search and now I am bombarded by subscribe to this ads. I don't want Apple Music. I have enough music. Stop trying to sell me things.
Score: 9 Votes (Like | Disagree)

You're not alone. I really don't understand what Apple is trying to achieve with the TV app and TV+, along with whatever else they've shoved in there. Seems like a hot mess.

I miss the "Videos" app, where I could play the videos I synced or downloaded onto my iPhone/iPad, and didn't have to wade through all of this confusing convoluted crap.
Score: 4 Votes (Like | Disagree)

mrongey
I remember when apple.com used to be where you would go to watch trailers.
Score: 4 Votes (Like | Disagree)