Samsung this week provided reviewers with Galaxy Fold devices for some hands-on time, and it appears the folding smartphone may be suffering from some serious flaws. Three of the reviewers who received a Galaxy Fold have already experienced failures, all of which focus on the display.

The Verge's Dieter Bohn says that his Galaxy Fold device broke after a random bulge appeared on the display, perhaps from a piece of debris that had gotten into the hinge. The debris, or whatever the bulge was, pressed into the display hard enough to break it. 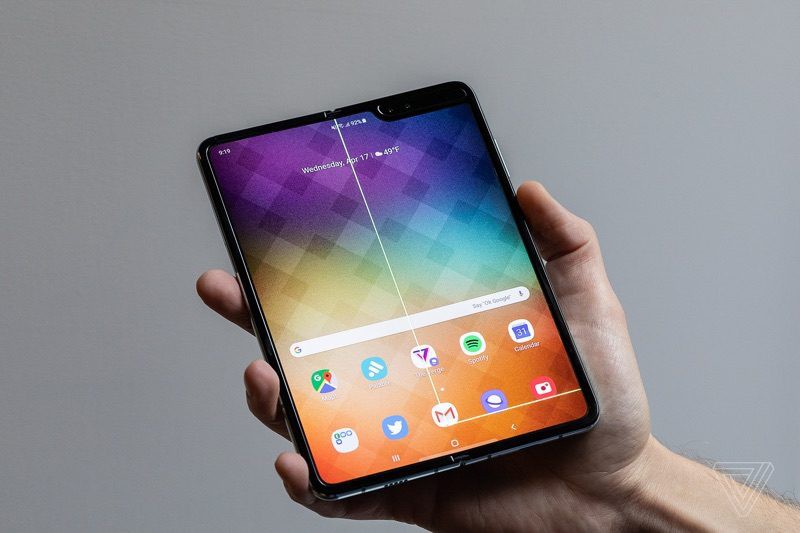 Broken Galaxy Fold OLED display via The Verge
Bohn says that he did not mistreat the phone, doing "normal phone stuff" like putting it in a pocket and opening and closing the hinge.

It's a distressing thing to discover just two days after receiving my review unit. More distressing is that the bulge eventually pressed sharply enough into the screen to break it. You can see the telltale lines of a broken OLED converging on the spot where the bulge is.

Similarly, CNBC's Steve Kovach shared a video of his review unit displaying a flickering, failing screen after just a single day of use.

Bloomberg's Mark Gurman also ran into a catastrophic display failure. His Galaxy Fold is broken and unusable, appearing to feature some of the same screen failures as Kovach's unit.

The screen on my Galaxy Fold review unit is completely broken and unusable just two days in. Hard to know if this is widespread or not. pic.twitter.com/G0OHj3DQHw — Mark Gurman (@markgurman) April 17, 2019

In Gurman's case, he says that there was a protective layer on the screen that is not supposed to be removed, but this was not communicated to him. He took it off, which may have contributed to the problem. Well-known YouTuber Marques Brownlee says that he did the same thing because there was no warning in the box.

The phone comes with this protective layer/film. Samsung says you are not supposed to remove it. I removed it, not knowing you’re not supposed to (consumers won’t know either). It appeared removable in the left corner, so I took it off. I believe this contributed to the problem. pic.twitter.com/fU646D2zpY — Mark Gurman (@markgurman) April 17, 2019

Not all of the reviewers with broken units removed the plastic film, however, so there are clearly multiple issues impacting the Galaxy Fold. Three broken review units that failed within a day or two does not bode well for the device at all. It's not known if reviewers received a bad batch of the device or if units going out to customers will experience the same issues, but anyone considering a purchase should be aware of these failures.

Samsung's Galaxy Fold costs a whopping $1,980, which is a sensationally high price even for a device that works. Right now, Samsung is accepting pre-orders for the Galaxy Fold on carrier sites, and the first retail units are expected to be available to customers on April 26.

Scott6666
Folding a screen is kind of a stupid idea in the first place. Maybe this will make it all go away.
Score: 130 Votes (Like | Disagree)

zombiecoops
Having a protective layer that looks like it is removable is uniquely dumb.
Score: 117 Votes (Like | Disagree)

No but everyone bitched about Apple's lack of innovation and not jumping on this train when this was first announced... Now look at what happened.
Score: 83 Votes (Like | Disagree)

you guys bitch about Apple????

Tuesday May 26, 2020 2:31 am PDT by Tim Hardwick
Apple will use a Lightning port instead of USB-C in the upcoming "iPhone 12," but it will be the last major series of Apple's flagship phones to do so, with models set to combine wireless charging and a port-less Smart Connector system for data transfer and syncing in the iPhone "13 series" next year. The above claim comes from occasional Apple leaker and Twitter user "Fudge" (@choco_bit),...
Read Full Article • 346 comments

Tuesday May 26, 2020 5:30 am PDT by Joe Rossignol
Apple plans to release several higher-end devices with Mini-LED displays in 2021, including a new 12.9-inch iPad Pro in the first quarter, a new 16-inch MacBook Pro in the second quarter, and a new 27-inch iMac in the second half of the year, according to Jeff Pu, an analyst at Chinese research firm GF Securities. This timeframe lines up with one shared by analyst Ming-Chi Kuo, who recently...
Read Full Article • 77 comments