YouTube TV today announced a price hike for all users, first hitting new subscribers immediately and then arriving for existing subscribers beginning with billing cycles after May 13. The price hike will be a $10 increase on the monthly cost of the live TV streaming service, boosting the price of the platform to $49.99/month. 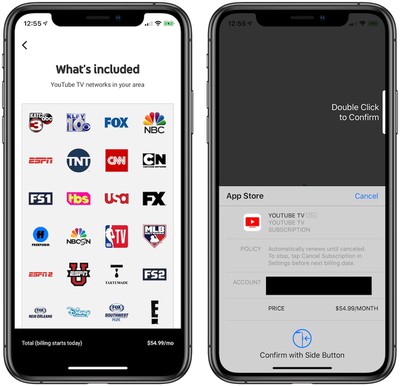 The cost of YouTube TV will be even more if you subscribe to the service through one of Apple's devices, as those members will be billed at $54.99/month due to the 30 percent cut that Apple takes during the first year of an annual subscription. Apple's policy has resulted in divergent prices for numerous apps and services on the App Store, leading to legal battles with companies like Spotify.

For YouTube TV, the company says that the price increase is so that it can keep bringing its customers "the best possible service," today including the addition of Discovery network branded channels. Eight total channels are being added to YouTube TV as of this week: Discovery Channel, HGTV, Food Network, TLC, Investigation Discovery, Animal Planet, Travel Channel, and MotorTrend. EPIX is also available for an additional charge.

That means YouTube TV has now grown to over 70 channels. The base price of the service also includes 6 accounts per household, a cloud DVR with no storage space limits, 3 concurrent streams, and local affiliate coverage in over 90 percent of the markets where YouTube TV is available (which is now all U.S. markets).

With the changes, Hulu With Live TV and PlayStation Vue are now the cheapest options among the major platforms, and YouTube TV sits in the middle in terms of cost for entry-level subscriptions.

This is the third price hike in YouTube TV's history. The service originally cost $35/month and then increased its price to $40/month in the spring of 2018.

dominiongamma
I thought these services were suppose to compete with cable no longer the case with these prices
Score: 56 Votes (Like | Disagree)

jk1211
Im confused, at $45-55/month what are you "saving" for the channels you get? That is basically cable prices, and then you have to increase your data on some ISPs (like Comcast) or risk hitting the caps.

Where I am Comast is roughly $100-110/month for cable and internet before taxes etc; what are you saving paying $50 for one of these and then $50 for the base 25mb down internet?

I just dont see how this is a cost saving thing anymore; they all want more and more price increases.
Score: 40 Votes (Like | Disagree)

now i see it
Boredom is getting more & more expensive
Score: 40 Votes (Like | Disagree)

Silver Idaten
Oh boy, can't wait to not use YouTube TV. What a joke.

Then again, after they emailed me offering a free trial, but then charged me a few days later and said because I signed up for it on an iPad I not only won't get a free trial, but I have to pay a higher rate, and they also can't refund me, I immediately got my money refunded from Apple. YouTube TV can **** off, what a terrible first impression.
Score: 34 Votes (Like | Disagree)

Blackstick
Been a cord cutter for 7 years with no regrets, watch less TV than ever although I do enjoy Netflix and Prime... learned a bit of Python and some more Spanish - better use of the time.
Score: 29 Votes (Like | Disagree)

derek
Bait.
Switch.
Gouge.
Same Old Story in the media biz. I cut the cable for a reason: Exorbitant price gouging.
No Google. No.
Score: 23 Votes (Like | Disagree)
Read All Comments