Last week, CNET shared a new rumor suggesting Apple is working on a pair of wire-free Powerbeats Wireless Earphones designed for workouts, similar in design to the AirPods. Today, those new earbuds, called the Powerbeats Pro, were spotted in iOS 12.2.

The iOS 12.2 update, which was released following Apple's event, has an image of the ‌Powerbeats Pro‌ discovered by 9to5Mac, giving us our first glimpse at what Apple's Beats-branded wire-free earbuds will look like. 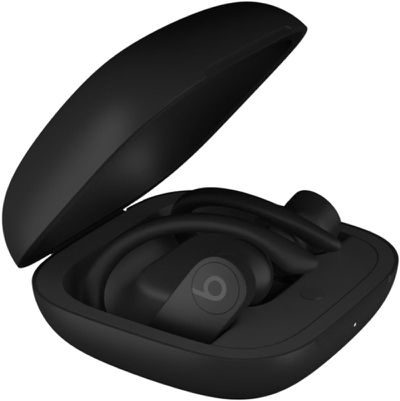 It's not clear when Apple plans to release the ‌Powerbeats Pro‌, but with imagery available in iOS 12.2, they could come relatively soon.

CNET says the new earbuds could include the H1 chip that's in Apple's recently released second-generation AirPods, and while not mentioned, it's possible the Powerbeats will also support wireless Qi charging.

The new Powerbeats could also offer better bass and water resistance than the AirPods, as well as the ability to stay in the ears during rigorous activity.

If that's the case, the Powerbeats could also be compatible with the long-awaited AirPower, which rumors suggest is supposed to be launching soon.

There's no word on what the new Powerbeats will cost. Apple priced the new AirPods with Wireless Charging Case at $199, and current Powerbeats also cost $199, so the price could stay the same or increase to match the AirPods price increase.

jimmy_uk
Got super excited for a second but damn, powerbeats are so uncomfortable.

Bose QC30 still the most comfortable earphones I've ever tried but they don't seem to be able to make them to last beyond a year before rubber comes away from neck band.

iMi
I prefer Apple's Beats products over Apple's Apple branded offerings at this point. The sound is richer and of course we have many more options. PowerBeats are okay. The new ones look very sleek. Studio 3 are fantastic. Looking forward to this one.

I prefer Apple's Beats products over Apple's Apple branded offerings at this point. The sound is richer and of course we have many more options. PowerBeats are okay. The new ones look very sleek. Studio 3 are fantastic. Looking forward to this one.

So, so ridiculous. :rolleyes:

Beats cheaper than AirPods? I'd like to see that...:cool:

This is what I was actually looking forward to when they released the current AirPods, water resistant and is meant for heavy workouts. Now, I'm not sure if I should wait next year or get this one.

Beats cheaper than AirPods? I'd like to see that...:cool:

I updated the post after remembering how damn expensive my Powerbeats 3 were even with wire. This is actually scary...
Score: 2 Votes (Like | Disagree)
Read All Comments