A 4K version of the movie "Aquaman" has popped up on torrent sites, and, as noted by TorrentFreak, it looks like the file may have come from iTunes, suggesting Apple's protections for 4K content have been breached.

The "Aquaman" file in question, which was shared earlier this week on Reddit, is labeled as a Web-DL, a name used in torrents to denote where it's from. Web-DL indicates a file pulled from a streaming service like Netflix, iTunes, and Amazon. 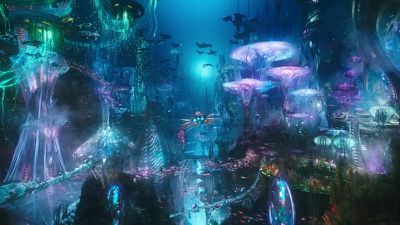 The title, "Aquaman.2018.2160p.WEB-DL.DDP5.1.HDR.HEVC-MOMA," suggests that this is a 4K release that was decrypted directly from iTunes. This is something that has never happened before with a 4K WEB-DL.

The file is indeed in 4K, and it popped up on torrent sites shortly after the movie was released on iTunes. There are no 4K releases of "Aquaman" from Netflix or Amazon, which led to immediate speculation that someone had managed to decrypt the file from iTunes.

4K files from iTunes have never been spotted on piracy sites before, making this a first that the piracy community is excited about. "4k Web-dl, history has been made today for pirates," wrote one reddit user on the r/piracy subreddit.

TorrentFreak says that it's "too early" to jump to conclusions about the origin of the file. While it's 4K, it could be mislabeled. There's a 4K version on VUDU, though the pirated version was uploaded ahead of the VUDU release.

If it is from iTunes, it's not yet clear how it was accessed. 4K content is only available on the Apple TV via tvOS, suggesting that if there's a security hole, it's in the tvOS operating system.

A source who has experience with the matter believes that it most likely comes from iTunes, as advertised. How, exactly, remains a mystery, but there may be a vulnerability in Apple's tvOS.

"Apple has 4k only on Apple TV running tvOS. I assume they skipped checks, if the device is jailbroken, and someone just dumped the encrypted stream and decrypted it via what's in memory as keys," says our source, who prefers to remain anonymous.

Since Aquaman appeared, two additional 4K Web-DL files for "Spider-Man: Into the Spider-Verse" and "Can You Ever Forgive Me?" have surfaced on torrent sites.

If there is indeed a vulnerability that has been exploited by those who pirate movies to access 4K iTunes content, Apple is likely to implement a fix quickly to prevent pirates from stealing additional 4K movies.

It's not about the money for them. For some it's a challenge - and one they enjoy, for others it's a crusade - fighting against greedy corporations, and for some, it's for the street cred - which could lead to employment opportunities.

Not taking a side, but you can't just "these guys steal cause they can't afford it and need to get jobs" it's not accurate.
Score: 31 Votes (Like | Disagree)

It is not about "not having to pay". People who have skills to crack such stream probably have high paying job somewhere, they probably are putting their skills to use somewhere where the pay is very good.


There is thrill in the act itself, which is better than any kind of money.
Score: 25 Votes (Like | Disagree)

Xenomorph
Is cracking iTunes more likely than someone simply getting access to a 4K Bluray version early and claiming it to be "Web-DL"?
Score: 20 Votes (Like | Disagree)

On a 5K iMac, there's no way to legally play back a 4K movie. Apple forces you to play it on an Apple TV. While I don't bother with piracy, it makes me angry that I can not play the 4K content from iTunes, that I paid for, on my iMac. The iMac is literally the best screen I own. So I can understand why people do it.
Score: 15 Votes (Like | Disagree)

Porco
I completely disagree with pirating movies, music, software etc, but I also think it's stupid that one can't download a 4K title you've paid for, or that you have to use proprietary hardware to play it at all, and while those limitations exist it provides a convenient excuse for pirates to justify their behaviour, whatever their real motivations are.

I prefer physical media anyway so it's not like I am particularly affected either way.
Score: 14 Votes (Like | Disagree)

aaronhead14
Unpopular opinion: If movies were DRM-free to begin with, there would more more incentive for customers to buy them, and less incentive for pirates to steal them.
Score: 13 Votes (Like | Disagree)
Read All Comments