Apple is planning to add 1,200 new jobs in San Diego at an upcoming engineering hub, which is up from the 1,000 jobs that it promised when announcing the new facility in December. 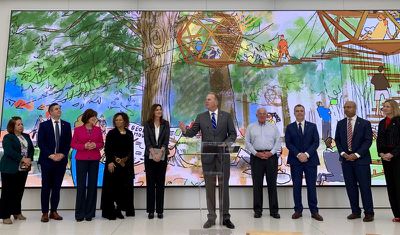 Apple is opening a tech hub in San Diego, and 200 of the 1,200 workers that it is planning on hiring will be in place "by the end of 2019." City officials say that Apple plans to make San Diego, which is the hometown of chipmaker Qualcomm, into a "principle engineering hub" with software and hardware positions "distributed across a number of specialty engineering fields."

Apple is working on its own modem technology and based on job listings, has been targeting Qualcomm employees, many of whom might not want to leave San Diego.

Thrilled that Apple is growing in San Diego, a beautiful city with so much talent! https://t.co/lyO8JQ7ETy — Tim Cook (@tim_cook) March 6, 2019

Apple has been a part of San Diego for nearly 20 years through our retail presence and small, fast-growing teams - and with this new investment we are proud to play an even greater part in the city's future. You don't have to try too hard to convince people that San Diego is a great place to live, work and do business, and we're confident our employees will have a great home among the community there."

While there's no official announcement on where Apple's new mini campus will be located, San Diego's KGTV says the company is said to be eyeing a building southwest of Qualcomm's main campus in University City. Wherever it's located, the building will include hundreds of thousands of square feet of office, lab, and research space.

Apple's vice president of Global Real Estate and Facilities said that after Apple made its initial announcement about plans to invest in a San Diego facility, the mayor offered details on all San Diego has to offer, leading Apple to increase its investment.

"We were excited to announce in December that we planned to grow our presence here and add one thousand jobs, and then Mayor Faulconer and members of his team very thoughtfully and convincingly walked us through everything the San Diego region has to offer," said Kristina Raspe, Apple Vice President of Global Real Estate and Facilities. "So we went back and sharpened our pencils and increased our investment."

Apple's move to San Diego is part of a wider effort to expand its business across the United States, which also includes a $1 billion campus in Austin, Texas along with new sites in Seattle and Culver City and an additional investment in U.S. data centers.

Well, they are in season and easily identified by their thick glasses, flannel shirts, and lustrous hipster facial hair.

Mr. Dee
Sometimes I feel like this growth is leading to nowhere. Certainly, these plans were in development probably years ago when the iPhone was selling like crazy. But with sales slowing down, users keeping their devices for longer, I wouldn’t be surprised if within 5 years Apple starts downsizing. The first sign is when stores stop being profitable and they start closing them down.
Score: 9 Votes (Like | Disagree)

Sasparilla
Sounds like Apple has made an internal commitment to build their own modem chips - now its time to get the expertise from the best in the business.

If that's what Apple is doing then this looks like a good plan.

It seems like Apple is feeling the heat from Samsung's unbelieveable product line. The new Samsung phone DESTROYS the iPhone’s A chip. Johny Srouji is finished. Game over. I highly doubt any of Apple’s stupid innovations like APFS, T2, W1 will stand against Samsung. Samsung is literally building the future with the Fold. The iWatch ain’t it. It’s a gimmick, and NO, it has not saved any lives. NO.

I just burst out laughing reading that - it's just rediculous. Apple doesn't have to worry about Samsung - they weren't stealing Apple's sales cause Sammy's sales were down drastically year over year as well. The world smartphone market peaked in 2016 and nearly all of Apple's decreases last year were in China (not from Sammy phone sales). Sammy has to worry about the Chinese who are stealing its sales. You must be getting paid to go to a Mac / Apple site and write this stuff, right?
Score: 5 Votes (Like | Disagree)
Read All Comments