Apple today released its 2019 Supplier Responsibility Report, offering a look into Code of Conduct violations in Apple's supply chain and details on progress made with programs promoting health, education awareness, and more.

Apple shares an updated Supplier Responsibility Report on an annual basis in an effort to be transparent about the worker conditions in supplier factories and the steps that Apple takes to improve the lives of the employees that create the range of Apple products available to consumers. Data for these reports are gathered from audits of Apple supplier facilities, with 770 locations audited across 30 countries in 2018. 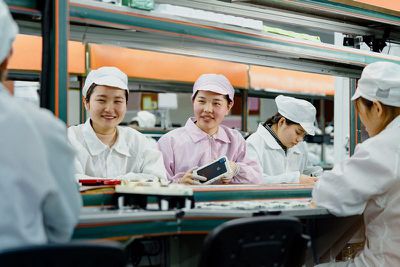 As of 2018, Apple says that 17.3 million supplier employees have received training in workplace rights, while 3.6 million have been provided with advanced education skills and training, including App Development with Swift courses. Apple chief operating officer Jeff Williams said that in everything Apple does, "people come first."

"We are constantly raising the bar for ourselves and our suppliers because we are committed to the people who make our products possible as well as the planet we all share. This year, we're proud to give more people an opportunity to advance their education. Working alongside our suppliers, we're challenging ourselves to find new ways to keep our planet healthy for future generations. Our goal has always been not just to drive progress in our supply chain, but to drive meaningful change across the industry."

Employees who participated in the Swift training course have created more than 40 apps, while more than 1,500 Apple supplier employees were able to earn a college degree through Apple's educational offerings. Health training programs covering nutrition, maternal health, and more have reached upwards of 250,000 people.

Over the years, Apple has had problems with debt-bonded labor in its supply chain, where recruiters charge factory workers for a job. Apple has long disallowed this practice, and in 2018, Apple introduced new programs to prevent debt-bonded labor in high-risk locations and it limited subcontracting for custodial staff in retail stores. Stricter standards for suppliers who hire foreign contract workers were also implemented.

Apple in 2018 saw a 30 percent increase in "high-performing" suppliers that adhere to the guidelines in its supplier Code of Conduct. On a 100 point assessment scale implemented by Apple, its suppliers earned an overall score of 89 in the Labor and Human Rights category, up from 86 in 2017. The deductions in score came primarily from violations related to working hours and wages.

For Health and Safety and Environment, Apple's suppliers earned an overall score of 93 in each category, up from 90 and 91, respectively, in 2017.

As for environmental efforts, Apple says that all of its final assembly sites for iPhone, iPad, Mac, Apple Watch, AirPods, and HomePod are now certified "Zero Waste to Landfill" thanks to a focus on reuse and recycling. Apple suppliers have diverted 1 million tons of garbage from landfills over the course of three years.

Apple has also expanded its clean water program to 116 suppliers, saving 7.6 billion gallons of water in 2018. Greenhouse gas emissions were reduced by more than 466,000 annualized metric tons, equivalent to removing 100,000 cars from the road.

Apple's full report [PDF] goes into much more detail on the specific programs available to supplier employees and the results from those programs, plus it provides a deeper look into conditions at supplier locations and offers more insight into Apple's environmental efforts.

NachoGrande
Does this include a suicide report?
Score: 5 Votes (Like | Disagree)

Does this include a suicide report?

I’d love to hear you and other predictable pot shot lobbers get into some detail about the supplier responsibility reports and similar improvement efforts by Samsung, Google, Huawei, and others.

As for environmental efforts, Apple says that all of its final assembly sites for iPhone, iPad, Mac, Apple Watch, AirPods, and HomePod are now certified "Zero Waste to Landfill"

They signed up to send their trash to incinerators.
Score: 2 Votes (Like | Disagree)

Does this include a suicide report?

Are you looking for the "net" sum
Score: 1 Votes (Like | Disagree)

I’d love to hear you and other predictable pot shot lobbers get into some detail about the supplier responsibility reports and similar improvement efforts by Samsung, Google, Huawei, and others.

Wait for what exactly? A cursory google search would disavow you of the notion that Apple is alone or unique in their corporate sustainability efforts. Search terms like Samsung + sustainability, Google + sustainability, HP + sustainability, Microsoft + sustainability, etc. could go on, but you get the point. What you'll find is similar programs. Apple is to be lauded for their efforts but shouldn't be used to lob pot shots at others... like you did.;) Which is kinda ironic don'tcha think?
Score: 1 Votes (Like | Disagree)
Read All Comments