Apple recently acquired the patent portfolio of Lighthouse AI, a home security company that went out of business at the end of last year, reports London-based site IAM.

Lighthouse AI created in-home security cameras with people, pet, and facial recognition that used advanced AI techniques to distinguish adults from kids and to customize alerts. It also supported voice-based natural commands like "let me know if the kids aren't home by 4pm on weekdays" and "what did the kids do while I was out yesterday?" 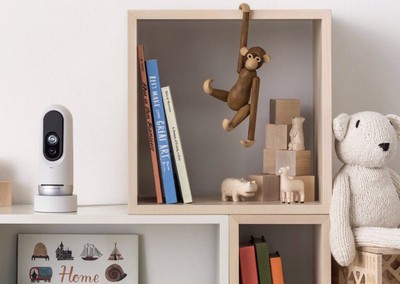 Lighthouse had several patents that have been snapped up by Apple. Most include standard security camera features, but there are a couple that are related to the depth sensing technology that Lighthouse used. A list of granted and pending patents that Apple purchased (via AppleInsider) are below:

Lighthouse ultimately went out of business because it was unable to compete in a crowded home security camera market where it was pitted against higher-profile companies like Ring, Nest, Logitech, and Arlo.

There have never been rumors suggesting Apple has an interest in creating a home security camera product, but some of the technology used by Lighthouse could be applied to other hardware. Apple already uses facial recognition technology in iPhones and iPads with the launch of Face ID, and it is rumored to be including 3D camera tech in 2020 iPhones and iPads.

I agree with you...just having a little fun at Apple's expense so to speak. They have been protesting patent trolls in East Texas and have plans to close the Apple stores in that area in protest.

Not in protest. They are closing them so they can’t be sued there. A protest is merely a complaint. What they’re doing is far more useful.
Score: 8 Votes (Like | Disagree)

Just because Apple bought these patents from a failed security monitoring company does not mean that Apple will only utilize them in its own security gadget. Most of the patents have very broad names and Apple can use them on other gadgets or use cases too.

The names of the patents don’t matter. The claims in the patents are what matter.
Score: 5 Votes (Like | Disagree)

Apple is not interested in home security cameras and has no plans for such a product, but some of the technology used by Lighthouse could be applied to other hardware.

To the author of the article: Based on what do you make this statement? Did Apple state this some where or is this just speculation on your part? You state this as a fact but provide no reference as to how you know.
Score: 4 Votes (Like | Disagree)

How about Homepod gets a Siri that's actually useful first before we start talking about security....

What do these patents have to do about Siri?
Score: 4 Votes (Like | Disagree)

soon Apple will be in East Texas filing patent claims.....

Doubtful. They haven’t done that with any of the rest of their patents.
Score: 3 Votes (Like | Disagree)

mcfrazieriv
Built into every Apple TV: "Siri, let me know when the children are watching skin-amax (Cinemax)".....
Score: 3 Votes (Like | Disagree)
Read All Comments

Friday July 10, 2020 11:12 am PDT by Juli Clover
Apple this month published a support document that warns customers against closing their Mac notebooks with a cover over the camera as it can lead to display damage. Image via Reddit Apple says that the clearance between the display and the keyboard is designed to very tight tolerances, which can be problematic. Covering the camera can also cause issues with automatic brightness and True Tone....
Read Full Article • 340 comments