Apple today launched a new article series in its Newsroom highlighting teachers and students who use innovative technology in the classroom.

The first article focuses on the Huntington Beach Academy for the Performing Arts (APA) in California, which hosts an annual student-created show called "Playlist." 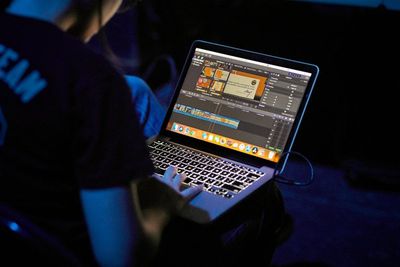 Students at Huntington Beach APA use Apple hardware and software to prepare for the show, such as Final Cut Pro to edit music videos and Logic Pro X to for audio production. Students get hands-on training in theater tech, audio recording, video production, and more as part of their curriculum.

An iPad Pro in the theater powers a Yamaha CL5 digital mixer for controlling sound levels, and students have access to a recording studio and other music creation spaces.

Many of the students are in the Music, Media, and Entertainment Technology program, designed to prepare them to succeed in the music industry. Jamie Knight, who runs the program, says it's imperative to focus on both technology and art, a philosophy Apple has always agreed with.

"We don't just focus on the technology," Knight says. "It's that performing arts experience that gives them leadership skills, confidence, team work, all of those soft skills that businesses want. You have to perform to get that, and then when you marry that with the technology and you give the kids the ability to have a real recording studio to work with, they're going to be the next Steven Spielberg, or the next Paul McCartney."

The school uses Apple products because they are "equipped with tools to teach," such as GarageBand and iMovie.

Apple's full dive into the Huntington Beach Academy for the Performing Arts and its annual "Playlist" production can be read in the Apple Newsroom.

bbplayer5
Apple is failing in education, chrome has taken over. Not a single district in my area has an abundance of Macs anymore.
Score: 13 Votes (Like | Disagree)

Apple is failing in education, chrome has taken over. Not a single district in my area has an abundance of Macs anymore.

Kids in my district all get a chrome book to use in high school. I guess the days of going to a computer lab filled with macs are long gone.
Score: 8 Votes (Like | Disagree)

Kids in my district all get a chrome book to use in high school. I guess the days of going to a computer lab filled with macs are long gone.

Whenever I'm studying in the university (here in Germany), I see less and less Macs around. Almost all of them are either the 2015 MacBook Pro or the 2015 MacBook Air (or earlier). No MacBooks with butterfly keyboard. Five years ago everyone had a MacBook Air or the Pro. It is sad to see, but understandable, given the high prices for recent Macs here in Germany and the continuous news about unreliability.
Score: 7 Votes (Like | Disagree)

Plutonius
Innovated tech is fine but I would rather schools focus on the fundamentals.
Score: 7 Votes (Like | Disagree)

The college I graduated from went from an all-mac environment in my first year to all PC the following year because Apple no longer makes desktop PCs capable of handling a professional content creation workflow for a decent price.
Score: 4 Votes (Like | Disagree)
Read All Comments

Monday January 24, 2022 9:20 am PST by Juli Clover
AT&T today announced the launch of upgraded AT&T Fiber plans, which support speeds of up to 5 Gigabits for some customers. There are two separate plans, one "2 GIG" plan and one "5 GIG" plan, available to new and existing AT&T Fiber subscribers. According to AT&T, the new plans are available to nearly 5.2 million customers across 70 metro areas including Los Angeles, Atlanta, Chicago, San...
Read Full Article • 203 comments

Monday January 24, 2022 7:12 am PST by Sami Fathi
Three months after their launch, the 14-inch and 16-inch MacBook Pros continue to experience high demand and seemingly short supply, with shipping dates for both models stretching into multiple weeks in several of Apple's key markets. In the United States, the baseline 14-inch MacBook Pro with the M1 Pro chip is estimated to ship in three to four weeks, promising an arrival by at least...
Read Full Article • 171 comments