iPhone users in the United States spent an average of $79 on App Store games and apps in 2018 according to an upcoming Sensor Tower report shared today by TechCrunch.

At $79, the revenue generated per active U.S. ‌iPhone‌ grew 36 percent year over year, up from an average of $58 spent per ‌iPhone‌ in 2017. ‌iPhone‌ users spent about $21 more in 2018 on in-app purchases and paid downloads. 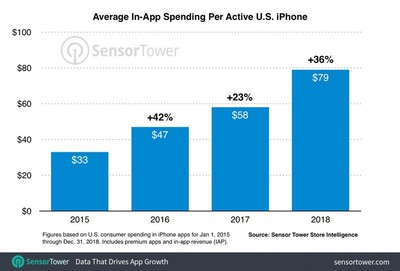 Much of the spending growth came from mobile gaming, with 56 percent of the $79 total average attributed to ‌App Store‌ games.

Spending was also up quite a lot in other categories such as entertainment, music, social networking, and health and fitness.

Sensor Tower believes that subscription apps are a contributing factor for the increased spending in many of these non-faming categories.

Over the holiday period including Christmas and New Year's Day, the ‌App Store‌ raked in more than $1.22 billion.

just.jon
If this doesn’t include Music and iCloud subscriptions, I don’t believe it.
Score: 11 Votes (Like | Disagree)

rcooked
Interesting. My volume of purchases is down, as I pay for quality I will use. I also avoid subscriptions like the plague - my fear is more of a shift to this model.

At $79, the revenue generated per active U.S. iPhone grew 36 percent year over year, up from an average of $58 spent per iPhone in 2017. iPhone users spent about $21 more in 2018 on in-app purchases and paid downloads.

The title you guys have given to this story is incorrect.

It is not accurate to say that the average iPhone user spent $79 last year.

It is accurate to say that iPhone users spent on average $79 last year.

Those are not the same thing.
Score: 7 Votes (Like | Disagree)

Am I pulling my weight enough? [emoji14]
Score: 5 Votes (Like | Disagree)
Read All Comments

Saturday May 15, 2021 11:08 am PDT by Juli Clover
Twitter has been working on some kind of subscription service since last summer, and Jane Manchun Wong, who often digs into new features coming in apps, has shared details on just what Twitter is exploring. Twitter's subscription service could be called Twitter Blue, and at the current time, it's priced at $2.99 per month. There will be a "Collections" section that allows users to save and...
Read Full Article • 83 comments