On the latest episode of The Talk Show, Daring Fireball's John Gruber discusses Apple TV and HomePod pricing and whether Apple is charging too much for some of its products.

According to Gruber, Apple is actually selling the 2017 ‌Apple TV‌ 4K at cost, suggesting the device costs Apple $180 to make. As for the ‌HomePod‌, Gruber said he believes Apple sells it at a loss. 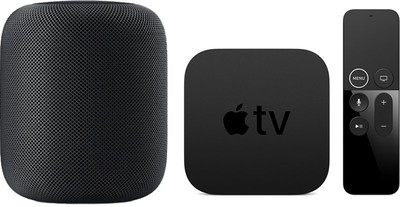 One thing I've heard from reliable little birdie is Apple effectively sells [the ‌Apple TV‌] at cost. Like they really are like a $180 box. And you think wow this is amazing, it has an A10 processor which we know is super fast, it has crazy good graphics.

I've heard the same thing about ‌HomePod‌ too. Why is ‌HomePod‌ so much more expensive than these other speakers you can talk to? ‌HomePod‌ I actually have reason to believe, Apple actually sells it at a loss. I can't prove it. I don't think it's a big loss.

Apple sells the 4K ‌Apple TV‌ for $180, and the ‌HomePod‌ for $349, though the ‌HomePod‌ at least is often available at a discount from third-party retailers. When the ‌HomePod‌ was released, estimates suggested it cost $216 to make in raw components, which does not factor into account other costs like research and development, software creation, and more.

Both the ‌Apple TV‌ 4K and the ‌HomePod‌ are priced higher than competing products from other companies like Amazon and Google, and rumors have suggested that Apple is working on lower-cost versions of both devices. For the ‌Apple TV‌, Apple is said to be developing a stick-style ‌Apple TV‌ device, and for the ‌HomePod‌, rumors suggest a smaller, cheaper model is in the works.

Gruber said that he also suspects the AirPods are priced close to cost as well, though he's not sure and can't prove it. And, of course, over time, things become less expensive to manufacture as component costs come down. Something that cost $180 in 2017 might not cost the same in 2019, as an example.

Overall, Gruber says that Apple isn't pricing its products too high, it's developing products that are too good.

"If you think it's a problem that these products are so expensive compared to their competition, that too few people buy them, it's not because Apple is charging too much, it's because Apple engineered and designed too good of a product," said Gruber.

WannaGoMac
I dont believe apple sells anything at cost.
Score: 217 Votes (Like | Disagree)

Overall, Gruber says that Apple isn't pricing its products too high, it's developing products that are too good.

now i see it
Gruber (whom I like) is a PR arm of Apple. He's on their "A" list. Whatever "rumors" he reveals have received the golden stamp of approval by Apple Markting. Sorry, but I just don't buy it that he has a "secret bird" trickling him secrets. That bird is probably Phil himself.
Score: 125 Votes (Like | Disagree)

gugy
There is no way Apple sells anything at cost or slight loss. Try again. lol
Score: 109 Votes (Like | Disagree)

pradeepbabloo
Well, the HomePod is really good speaker. I just wish Siri to be on par with Alexa or Google.
Having said that, I do not believe Apple sells it for a loss. May be for less profit, but not loss.
Score: 89 Votes (Like | Disagree)

Haha fixed that for you
Score: 73 Votes (Like | Disagree)
Read All Comments

Friday May 7, 2021 1:51 am PDT by Tim Hardwick
An early look at an ongoing analysis of Apple's App Tracking Transparency suggests that the vast majority of iPhone users are leaving app tracking disabled since the feature went live on April 26 with the release of iOS 14.5. According to the latest data from analytics firm Flurry, just 4% of iPhone users in the U.S. have actively chosen to opt into app tracking after updating their device...
Read Full Article • 167 comments

Wednesday May 5, 2021 6:03 pm PDT by Juli Clover
The safeguards that Apple built into AirTags to prevent them from being used to track someone "just aren't sufficient," The Washington Post's Geoffrey Fowler said today in a report investigating how AirTags can be used for covert stalking. Fowler planted an AirTag on himself and teamed up with a colleague to be pretend stalked, and he came to the conclusion that the AirTags are a "new means...
Read Full Article • 412 comments