iMac Last Updated 602 Days Ago, Longest Span Ever Between Updates

As noted in the MacRumors Buyer's Guide and discussed in the MacRumors forums, it has now been 602 days since Apple last updated its iMac lineup, a new record for the longest span between ‌iMac‌ refreshes ever. The previous record was 601 days between October 2015 and June 2017 refreshes.

In fairness, the iMac Pro was released in December 2017, but standard 21.5-inch and 27-inch ‌iMac‌ models have not been updated in over a year and a half. Since the original ‌iMac‌ launched in 1998, the computer has typically been updated at least once per year, with the sole exceptions being 2016 and 2018.

The ‌iMac‌ is not alone. The 12-inch MacBook and Mac Pro have also set record-long spans of 602 days and 1,866 days and counting respectively since their last refreshes. Apple has at least promised to release an all-new Mac Pro with a "modular" design at some point in 2019, but has yet to share additional details.

Apple has hosted a March event in three out of the past four years, so perhaps we'll see new iMacs and MacBooks at a March 2019 event. Other items on the agenda could include new iPad and iPad mini models, a new iPod touch, new AirPods, and the long-awaited AirPower mat if production rumors were true.

Nah. It was last updated yesterday by me – switched from 8 to 24GB RAM.

Removing that ability is probably what's taking so long.
Score: 52 Votes (Like | Disagree)

Dbolander
Disheartening to me that annual Mac updates are more the exception than the rule these days.
Score: 41 Votes (Like | Disagree) 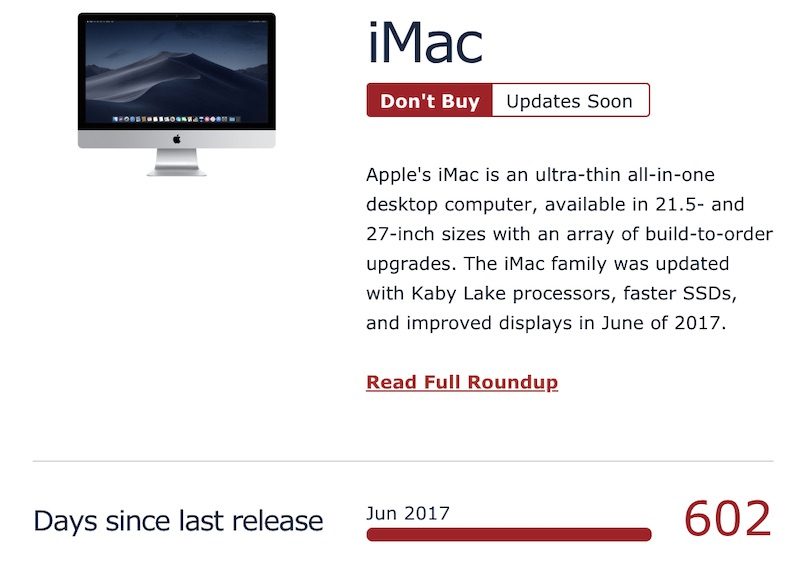 I strongly - and seriously - suggest that MacRumors changes the misleading "Updates Soon" (*) to "Possible Updates" in all the Apple computers lineup since several years can pass between actual updates.

Let's get everyone fired up about it.

Apple is a mobile computing/consumer products company. iMac is fine for 602 days...

I'm sorry but I don't want to pay the today price for 602 day old technology. You are right that most people probably don't need more power, but you have to be foolish to pay the same price to purchase today for a two year-old machine.
Score: 34 Votes (Like | Disagree)

Thursday January 14, 2021 9:32 pm PST by Juli Clover
Apple is working on two new MacBook Pro models that will feature significant design changes, well-respected Apple analyst Ming-Chi Kuo said today in a note to investors that was obtained by MacRumors. According to Kuo, Apple is developing two models in 14 and 16-inch size options. The new MacBook Pro machines will feature a flat-edged design, which Kuo describes as "similar to the iPhone 12" ...
Read Full Article • 513 comments

Friday January 15, 2021 1:46 pm PST by Juli Clover
Apple has started "early work" on an iPhone that has a foldable display, according to a new report from Bloomberg's Mark Gurman. Though testing of a foldable iPhone has begun, Apple has not committed to releasing a device that has a foldable display. Development has not yet expanded beyond a display and Apple does not have full foldable iPhone prototypes in its labs. Like foldable...
Read Full Article • 198 comments

Sunday January 17, 2021 9:47 am PST by Hartley Charlton
Twitter user @DongleBookPro has today shared images of a prototype iPhone 5s in an unreleased Black and Slate color. The iPhone 5s was launched in September 2013. The device featured Touch ID, a 64-bit processor, and a True Tone LED flash for the first time. Other new features included a five-element lens with an f/2.2 aperture, a 15 percent larger camera sensor, Burst Mode, and Slo-Mo...
Read Full Article • 44 comments

Friday January 15, 2021 6:17 am PST by Hartley Charlton
Incoming Intel CEO Pat Gelsinger has said that the company must "deliver better products" than Apple, which he described as a "lifestyle company," and says that Intel's best days are "in front of it" (via The Oregonian). Speaking at an Intel all-hands meeting yesterday, Gelsinger derisively implied that Apple is merely a "lifestyle company," so Intel must be able to surpass its technology: ...
Read Full Article • 270 comments

Friday January 15, 2021 10:23 am PST by Juli Clover
Apple is developing two versions of the Mac Pro to succeed the Mac Pro that was first released in December 2019, according to a new report from Bloomberg. The first updated Mac Pro is a direct successor to the current Mac Pro and it will use the same design. It may also be equipped with Intel processors rather than Apple silicon chips, and it could be one of the sole machines in the Mac...
Read Full Article • 238 comments