Samsung is planning to announce its new 2019 flagship smartphones on February 20, but ahead of their debut date, benchmarks of the new S10+ model were shared on Slashleaks.

According to the data, Apple's current crop of iPhones, equipped with A12 chips, will outperform the Snapdragon 855 processor in Samsung's smartphone. 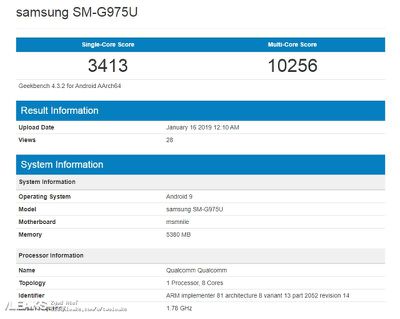 Comparatively, the A12 Bionic chip in the iPhone XS features a single-core Geekbench score of 4797 and a multi-core score score of 11264.

Apple's A-series chips often outperform the Qualcomm chips that Samsung uses because Apple is designing its chips in house and is able to offer tighter integration between hardware and software. As AnandTech explained in a review of the ‌iPhone‌ XS and XS Max, Apple's chips are also far more efficient:

Overall the new A12 Vortex cores and the architectural improvements on the SoC's memory subsystem give Apple's new piece of silicon a much higher performance advantage than Apple's marketing materials promote. The contrast to the best Android SoCs have to offer is extremely stark - both in terms of performance as well as in power efficiency. Apple's SoCs have better energy efficiency than all recent Android SoCs while having a nearly 2x performance advantage. I wouldn't be surprised that if we were to normalise for energy used, Apple would have a 3x performance efficiency lead.

While benchmarks are often not reflective of real world usage, the data does suggest that Apple's 2018 iPhones will be a good deal faster than Samsung's 2019 smartphones. Given that both the A12 and the Snapdragon 855 are super fast processors able to handle gaming and day to day tasks with ease, Android users won't be at a serious disadvantage.

Since Samsung hasn't released the Galaxy S10+, there's still a chance these details could be off, but it's unlikely since we're quite close to the debut of the device.

We might always be hating on Apple and lack of decent upgrades to iPhone/Mac, but we damn well know that Samsung can never touch us.

"Touch us" Who are you some kind of elite for owning an iPhone? :eek:
Score: 43 Votes (Like | Disagree)

Glideslope
“Given that both the A12 and the Snapdragon 855 are super fast processors able to handle gaming and day to day tasks with ease, Android users won't be at a serious disadvantage.”

Android users are always at a disadvantage. :apple:
Score: 42 Votes (Like | Disagree)

IRockThat828pScreen
Not a surprise, Apple's been ahead in the chip game since the 5S.
Score: 41 Votes (Like | Disagree)

allenvanhellen
This doesn’t mean much to me. Phones are powerful enough now. iOS has quirks and bugs and opportunities for refinement and greater functionality that need to be solved and realized. The only advancement I really care about now from the processor is how much battery life it can get.
Score: 29 Votes (Like | Disagree)

Ahhh - and what might that be? The ugly Samsung design?

So this is prettier?

now i see it
Using Geekbench to decide which side you want to go to is silly. Nowadays the only test that's worth anything is to use them both for a bit and see which one you prefer. There's a lot more to smartphone satisfaction than raw CPU scores, that's for sure.
Score: 23 Votes (Like | Disagree)
Read All Comments