Apple Music Gets Another Unofficial Web Player With Launch of 'Musish'

Last month, software engineer Naveed Golafshani created an unofficial Apple Music web player that allowed users to sign into their Apple Music accounts and listen to music on a laptop or desktop computer, without needing to open iTunes.

This is an addition to ‌Apple Music‌ that many subscribers have been requesting for years, and now another unofficial ‌Apple Music‌ web player has emerged online. Created by software engineer Brychan Bennett-Odlum and his team, Raphaël Vigée, James Jarvis, and Filip Grebowski, the new web player is called "Musish" [GitHub Link]. 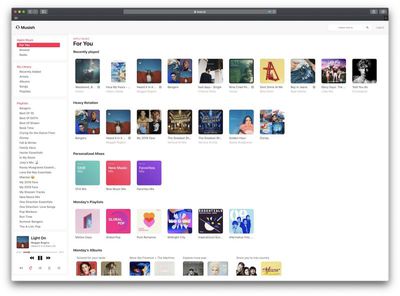 Musish has an all-white design that closely mirrors the look and feel of ‌Apple Music‌ on iOS and macOS. Just like the previous player, Musish requires you to sign in to your Apple ID to be able to play music on the web, using Apple's official public APIs to handle authentication. This is handled in a separate window under the Apple.com domain, and Musish says at no point does it ever request, log, or gain access to user information.

Bennett-Odlum told us that he and his team are heavy ‌Apple Music‌ users, and the origins of Musish began at a hackathon event in San Francisco just last month.

We are all heavy users of Apple Music, but found listening at work hard as it drained our phones’ battery lives and we didn’t want to set up our Apple IDs on our work laptops.

We started Musish at a hackathon in San Francisco in early December after noticing the APIs Apple provide for the service and realising that it’d be a pretty nifty solution to the problem!

After logging in, Musish presents you the expected ‌Apple Music‌ tabs: For You, Browse, Radio, and My Library, although some are pared down compared to the full experience. For You has recently played songs, albums in heavy rotation, personalized mixes, the day's playlists and albums, and new releases. ‌Apple Music‌'s social features like friend profiles and "Friends Are Listening To" aren't available.

Browse has top songs, daily top 100 playlists, top playlists, top albums, and a genres tab. Just like Golafshani's web player, Musish is missing Radio features at this time, but the site's developers promise that ‌Apple Music‌ Radio support is coming soon. If you're searching for a specific artist, playlist, or album, you can use the search bar at the top right of Musish, which remains open on every tab.

To play music, you simply click on the album/playlist you want to hear, and then click Play, Shuffle, or select a specific song. The Musish web player then places playback controls at the bottom left of the screen, where you can adjust the volume, turn on repeat, turn on shuffle, check out lyrics, and reorganize up next.

In Musish, you can configure the order of up next to your liking by click and dragging songs, and you can find another song, hover over it, click the ellipsis button, and click "play next" to place it next in your queue, just like the regular ‌Apple Music‌ apps.

According to Bennett-Odlum, the team still has a ways to go until Musish reaches its full potential, including work on mobile compatibility, a dark mode, and a more populated Browse section. The team welcomes feedback and feature suggestions on the GitHub page for Musish, which is open source so anyone can contribute to the project.

It's been seven months since Apple was rumored to be working on its own official web player for Apple Music, but as of now nothing has come out of the company in this regard. You can check out Musish for yourself by following this link.

So I’m going to enter my iTunes Apple ID and password on a third party website so I can listen to my music? NOT!

They use Apples native API for authentification, so they actually never get to see your credentials as far as I understood.
Score: 20 Votes (Like | Disagree)

Plutonius
Might be a good idea but I'm not sure I would trust my Apple ID to third party software.
Score: 19 Votes (Like | Disagree)

Im trying to help the community too, I’m just saying we should weigh the risk of giving your credentials on a third party website. Odds are this guy has good intentions and wouldn’t do anything wrong, but I can’t take that risk. Hopefully this inspires apple to release a web player of their own.


You don’t give your credentials to a third party website. This has been explained multiple times.

This thread is an interesting look into the determination of people who don’t understand what they are talking about repeating the same nonsense over and over again.

timber
If Apple is serious about services they should already have this.

Any "Services" offer has to be system agnostic.
Score: 12 Votes (Like | Disagree)

So I’m going to enter my iTunes Apple ID and password on a third party website so I can listen to my music? NOT!

Look up how this works. I'm very cautious and I see zero issue with this.
Score: 10 Votes (Like | Disagree)
Read All Comments