When it launched, Apple's HomePod smart speaker did not count toward an Apple Music subscription's device streaming limit. This meant that single-user Apple Music subscribers could stream one song on an iOS device and another on HomePod simultaneously, without one stream ending the other. Recently, this ability has disappeared for many Apple Music users, who are now unable to stream music on both HomePod and an iOS device at the same time. 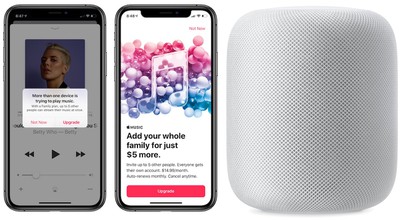 While single memberships transition to this method of HomePod streaming, Apple Music family memberships will be able to continue to stream multiple songs on both iOS devices and HomePod without any of the streams getting interrupted. Moreover, when HomePod interrupts music streaming on an iPhone, a new pop-up box on iOS displays an option for single membership subscribers to upgrade to an Apple Music family plan. The box explains that up to 5 other people can stream their music at once using the family plan.

According to a tipster, posts on Reddit, and a few accounts on the MacRumors forums dating back to last summer, the timeline for this change is murky. As far back as August 2018, MacRumors user cczhu mentioned not being able to play music on both HomePod and Apple TV simultaneously. Similar experiences were shared later in the year, with HomePod counting towards an account's device streaming limit when playing Apple Music on other Apple products, and now it appears that this tweak has hit many more users.

Over the weekend, a few users on r/HomePod posted similar stories. According to Reddit user veteran_t, on Saturday they noticed music playing on their iPhone paused a playlist on their HomePod. Deciding to speak with Apple Support, a senior specialist told the user that any claims about HomePod not counting toward an Apple Music subscription's device streaming limit are third party quotes. The specialist continued by saying Apple never advertised this feature and that veteran_t's HomePod is now working in the originally intended way.

TwoBytes
With the high price of the Homepod and limited functionality of Siri and now the now even more limiting restriction to use this beautiful and great sounding device for music, it seems like Apple keeps drilling nails into coffins.

What's happening to Apple these days? They are not listening to the public on price (recent news of decline of sales, poor china growth) and they are super slow to advance their technology (Siri vs the rest). Tim Cook apparently wakes up and reads the Apple customer news every morning. I hope he's reading this thread.

Apple: great products yes but nobody can afford them vs the cheaper and vastly more expansive options of other companies. Now technology is catching up, what Apple is holding onto (quality) is slowly not becoming relevant anymore.
Score: 40 Votes (Like | Disagree)

Mcsnee
This sounds like yet another EXCELLENT reason not to invest in a HomePod.
Score: 36 Votes (Like | Disagree)

Rob_2811
HomePod owners are not going to be happy about this. Commiserations to them both.
Score: 35 Votes (Like | Disagree)

RyanXM
So Apple released something that "didn't" work as intended and suddenly we, the consumer who have paid for devices and services, are now suppose to be ok with this?

Dear User, we eff'ed up so now you need to pay another $60 a year for being able to stream on multiple devices. Sincerely, Apple.

This sounds like a response to the poor performance of the newest releases of the iPhone not performing to where Apple thought they would. This is just poor execution by Apple, for at least the 10th time under Tim "Bottom Line" Cook.
Score: 33 Votes (Like | Disagree)

Friday July 10, 2020 11:12 am PDT by Juli Clover
Apple this month published a support document that warns customers against closing their Mac notebooks with a cover over the camera as it can lead to display damage. Image via Reddit Apple says that the clearance between the display and the keyboard is designed to very tight tolerances, which can be problematic. Covering the camera can also cause issues with automatic brightness and True Tone....
Read Full Article • 342 comments