Today marks the 14th anniversary of the unveiling of the first-generation iPod shuffle, presented by former Apple CEO Steve Jobs on stage at the Macworld Expo in San Francisco. On January 11, 2005, Apple debuted the first-of-its-kind iPod shuffle, which completely lacked a display, weighed 0.78 ounces, and held up to 240 songs (on the 1GB model) that would be played randomly.

At the Expo, Jobs called the iPod shuffle "smaller and lighter than a pack of gum," and touted the device's low-end 512MB model, which ran for $99 in the United States and could hold up to 120 songs (the 1GB version cost $149). "With most flash-memory music players users must use tiny displays and complicated controls to find their music; with iPod shuffle you just relax and it serves up new combinations of your music every time you listen," Jobs said.

Like previous iPods, iPod shuffle connected to a user's iTunes account to sync downloaded music onto the media player. The iPod shuffle also supported AutoFill, which automatically selected the perfect number of songs to fill out the iPod shuffle from iTunes. Besides randomly playing music on shuffle, users could also flip a switch on the back of the device to play music in order.

The iPod shuffle also doubled as a portable USB flash drive that users could store personal files on to exchange between computers. In the original press release, Apple mentioned that the iPod shuffle was the latest member of the iPod family, which at the time included the fourth generation iPod, iPod mini, iPod U2 Special Edition, and iPod photo.

Apple highlighted the iPod shuffle's portability in its first ads
Apple also sold accessories at the launch of the iPod shuffle, like an armband that turned the device into an athletic accessory, a sport case that came with a neck strap, a dock, and a USB power adapter. There was even a battery pack that extended the iPod shuffle's life from 12 hours to 20 additional hours. Every iPod shuffle came with an included lanyard so users could wear the small device around their neck.

iPod shuffle was a notable release for the iPod lineup because of its huge departure from the typical iPod feature set. Besides a display, it lacked a scroll wheel, ability to manage playlists, and typical iPod features like games, address book contacts, calendar, alarm, and other software mainstays of the iPods before the shuffle.

The only buttons on the front of the iPod shuffle were for Play/Pause, Next Song/Fast Forward, Previous Song/Reverse, and volume rockers. The back held a battery level indicator light, and the three-way switch that turned the device off or alternated between randomly playing music or playing it in order. The bottom of the iPod shuffle had a removable cap where the USB plug was hidden. 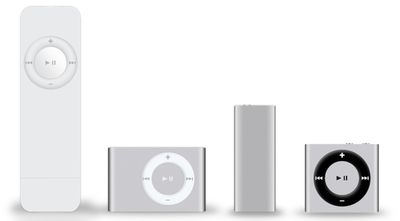 Every iPod shuffle generation by Matthieu Riegler via Wikimedia Commons
Apple eventually updated the iPod shuffle throughout numerous generations. The second generation debuted on September 12, 2006, coming in at half the size of the original model and with a built-in belt clip.

The third generation iPod shuffle launched on March 11, 2009, which returned to the long, rectangular design of the original device but introduced a brushed aluminum frame and VoiceOver features. This model completely lacked playback and volume controls on the device itself, and resigned these controls to the included EarBuds.

brofkand
The last gen was the best gen. Wish they still made them. They're still useful.
Score: 14 Votes (Like | Disagree)

How long before we get an iPhone Shuffle?

We already have it. It’s called the Apple Watch
Score: 11 Votes (Like | Disagree)

AngerDanger
Somehow, I've managed to accumulate the first three generations of Shuffle over the years. This is how I've thought of them:

* First gen – Most iconic and could plug directly into your computer.
* Second gen – Best form factor (area to left of navigation for your finger to open clip).
* Third gen – Confusing as hell, but at least it had song information, I guess?
* Fourth gen – Smallest design, buttons integrated again, plus song info. Bonza.

I always wished they made some combination of the first and fourth generations with an internal speaker too. The idea of being able to play music directly from an SD-card-sized device that needs no cables to plug into your computer still seems cool.

Low-res mockup of advertisement of said iPod that I made in 2009:

Since nobody wanted to buy them anymore after 12 years on the market, does this mean it was just a fad?
Or have smartphones and smaller smart watches replaced it (with streaming subscription music)?

The smarthphone just killed the market. For the majority of people having one device that could do the job made them redundant. This happened before streaming services even took off.
Score: 6 Votes (Like | Disagree)

Plutonius
I still have one somewhere.
Score: 5 Votes (Like | Disagree)

Calpike
I still use my first-gen Shuffle every day at the gym.
Score: 5 Votes (Like | Disagree)
Read All Comments