In the What to Expect article that we shared yesterday, we covered everything we think we'll see from Apple in 2019 based both on historical release data and the current rumors that are circulating about the company's 2019 product plans.

A new modular Mac Pro is in the works, and 2019 may be the year that we finally get the AirPower. Apple has more than a dozen original TV shows, which are set to debut through an upcoming streaming TV service that's coming in early 2019. Three new iPhones are on the horizon, and we may see updated AirPods, a new HomePod, and perhaps Apple-branded over-the-ear headphones. 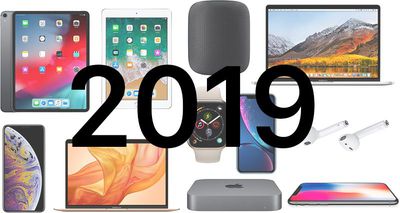 We're also expecting a new Apple Watch, updated versions of iOS and macOS with exciting new features, a refreshed iPad mini, and a redesigned lower-cost iPad, which could be 10 inches instead of 9.7. There's also a chance that Apple has some surprises in the works that we don't yet know about.

AR smart glasses, a virtual reality headset, an Apple Car, and autonomous driving software are all products Apple is rumored to be working on, with no official launch date known. We want to hear from the MacRumors community - what are you hoping to see Apple release in 2019?

Are there specific features you're hoping Apple will implement in iOS 13 or macOS 10.15? New AirPods and HomePod functions you're hoping for? Additions to the Mac and iPhone lineup?

Let us know what you want to see in the comments, and make sure to check out our What to Expect post for a look at the current rumors. Apple's 2019 product plans will become clearer in the early months of the year, and as always, we'll be covering every Apple rumor in depth here at MacRumors.

The MacRumors forums are also a rich resource for discussing upcoming products and rumors, and with so many product launches on the horizon for 2019, our forums are the place to be for lively discussions on what's coming.

Thank you to all of our readers and forum members for making MacRumors the absolute best source of Apple news, rumors, and advice on the web. We wouldn't be here without you, and we look forward to another rumor-filled year in 2019. Happy New Year!

Enclavean
No more unjustified price increases would be nice
Score: 220 Votes (Like | Disagree)

ThunderSkunk
Some new leadership, especially over in product.
Score: 121 Votes (Like | Disagree)

HiVolt
Mouse support for iOS on the iPad, and support for a basic file system with external storage support.
Score: 71 Votes (Like | Disagree)

sblemmy
I would like to see an design refresh on the iMac. The thick black bezels and giant chin are sorely outdated in 2019.
Score: 69 Votes (Like | Disagree)