Apple's latest report has been shared on a totally overhauled transparency website that also features past reports in a more visually digestible format, making it much easier to go through the data. 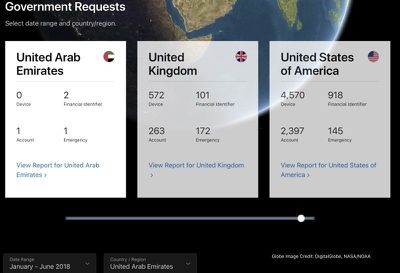 Apple's previous reports were delivered via PDF and could be difficult to parse, but the new site features a country-by-country breakdown with further details split into different request categories.

A provided slider lets you scroll through each country, while a date range dropdown lets you select either the most recent report or past reports. Collapsible categories offer up at a glance information on data like total device requests, emergency requests, requests for account deletion, FISA requests, and more.

Apple is now providing data on national security requests in bands of 500 instead of 250, in an effort to standardize its reporting with other tech companies, according to TechCrunch. FISA content is being broken down further into categories like photos, emails, contacts, and device backups.

Based on Apple's latest report, device data requests are on the rise around the world. Apple received a total of 32,342 requests covering 163,823 devices, providing data for 25,829 of the requests, an 80 percent data delivery rate.

In the United States, Apple received 4,570 requests for device data and responded to 3,697, providing data for a total of 81 percent of requests. Apple also received requests for financial identifiers, accounts, and emergencies, with the company's response rate listed in the chart below.

Germany made the most requests of Apple due to stolen device investigations, which is explained in a new "Matters of Note" section at the bottom of each category breakdown. Account requests were up in China and the United States, for example, due to a fraud investigations.

Apple received between 0 and 499 national security orders impacting between 1,000 and 1,499 accounts. Apple did not reveal any national security letters with lifted gag orders, which are reported on a six-month delay.

of course USA is the highest! I wouldn't expect anything less from the police state

Australia, Germany, and Spain had higher rates of government requests per capita than the US, whereas countries with a history of human rights abuses and lack of due process such as China, Russia, and Thailand had far lower rates.
Score: 15 Votes (Like | Disagree)

Freida
of course USA is the highest! I wouldn't expect anything less from the police state
Score: 8 Votes (Like | Disagree)

Can Google and Facebook do the same? I don't think so...Zuckerberg will only tell you what you wanna hear.

I like a good rant as much as anyone, but you do know that you can access the transparency reports for Google, Facebook, Microsoft and a host of other companies right? Heck, Google even links to everyone else's transparency reports, including Apple's.

On topic: I like these reports because they give a better window into what these companies face regarding governmental requests for info and how often the info is given. Helps to separate factual wheat from crazed anecdotal chaff
Score: 7 Votes (Like | Disagree)

Free speech is a big deal actually - European countries have dystopian "hate speech" laws which are as terrible as you can imagine, with people literally being put in a court of law and also being jailed for 'wrongthink'. Also, "innocent till proven guilty" is a big deal - something that France does not have. Also, Trudeau is out of his PC mind.

Incorrect: Presumption of innocence is part of the Charter of Fundamental Rights of the European Union.
Score: 7 Votes (Like | Disagree)

of course USA is the highest! I wouldn't expect anything less from the police state

Funny... its amazing how many people bash the U.S. (or other first world countries)... until you try living in a country with little human or legal rights or process... then you realize how great you had it back at home.
And when you come back home, you become so grateful for what you actually have and had taken for granted.
Score: 6 Votes (Like | Disagree)

Funny... its amazing how many people bash the U.S. (or other first world countries)... until you try living in a country with little human or legal rights or process... then you realize how great you had it back at home.
And when you come back home, you become so grateful for you actually have and had taken for granted.

Well, of course you can go to extreme and make it worse but thats not the point. I think majority of Europeans would agree, that US is not very "free" country as they advertise. :) Don't get me wrong, I love visiting etc. Its a beautiful country, but I don't think I would ever wanna live there. Much better to go to Canada instead as you get the nice side of US without so much nonsense :)

No country is perfect, but US is messed up.
Score: 4 Votes (Like | Disagree)
Read All Comments