Photos of Apple's rumored Smart Battery Cases for the iPhone XS and iPhone XS Max have been uncovered in a product merchandising guide for Apple Premium Resellers that was obtained by the blog Appleosophy. 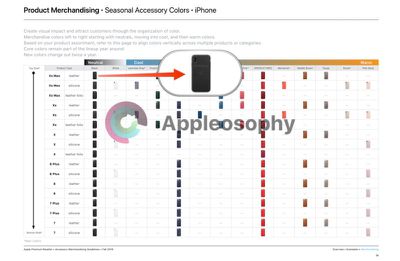 The guidelines instruct Apple Premium Resellers how to organize Apple's various leather and silicone cases for the iPhone 7 through iPhone XS Max in their stores. While the photos are low resolution, two of the cases clearly have a battery pack hump and a cutout for the vertically-aligned rear camera on the latest iPhones.

The guidelines are dated "Fall 2018," suggesting that Apple planned to release the new Smart Battery Cases within the past few months. The season officially ends this Friday, December 21, so there's still some time. Of course, Apple may also delay the cases until 2019 or never end up releasing them.

9to5Mac, which confirmed the merchandising guide is legitimate, earlier discovered assets related to Smart Battery Cases for the iPhone XS, iPhone XS Max, and iPhone XR within iOS and watchOS code. The assets suggest the cases might no longer have a "chin" extending past the bottom of the iPhone.

Apple's first Smart Battery Case was for the iPhone 6 and iPhone 6s, and was equipped with a 1,877 mAh battery that protruded out of the back of the case. Apple later released an iPhone 7 version with a similar design but larger 2,365 mAh battery. Both remain available for purchase for $99 in the United States.

At this point, ample evidence of Smart Battery Cases for the latest iPhones has surfaced, so all eyes are on Apple's online store.

Why not silicon? They have plenty of old iPhone parts to recycle :D

To be honest, a weird flexible iPhone case made out of gelatinous outdated iPhone processors would be badass.

Why not silicon? They have plenty of old iPhone parts to recycle :D
Score: 2 Votes (Like | Disagree)

Hopefully they will release this with AirPower and the updated AirPods early next year, but I kind of wonder if they’ll end up having a small event in early Spring for this, the iPad and iMacs.

Have an event that just introduces these cases, the AirPower mat, and the Qi AirPods. Have it hosted by Tim Allen in-character.
Score: 2 Votes (Like | Disagree)

LastStarfighter
Personally I travel for business and I've found having the smart battery case on my iPhone 7 is extremely handy. I've not even considered upgrading to an X or above without them making a battery case for it. Not having to charge your phone on a trans-atlantic flight is really plesant.

When these come out it opens up a few options! I was hoping they'll release one for the XR though. With it's reportedly better battery life than the XS, plus a battery case it would be something I'd consider worth having.

To me, battery life is the number one feature for any mobile tech. I know not everyone sees it that way but I always have.
Score: 2 Votes (Like | Disagree)
Read All Comments

Friday September 30, 2022 12:51 pm PDT by Juli Clover
Apple CEO Tim Cook has been touring Europe this week, sitting down for interviews with various media publications. Augmented reality has been a running theme in Cook's discussions, and it is a topic he brought up again in an interview with Dutch publication Bright, which is part of RTL News. "I think AR is a profound technology that will affect everything," Cook said, echoing comments from...
Read Full Article • 307 comments

Sunday October 2, 2022 6:41 am PDT by Joe Rossignol
Apple is developing new iPad Pro, Mac, and Apple TV models, and at least some of these products will be released in October, according to Bloomberg's Mark Gurman. However, Gurman continues to believe that Apple is unlikely to hold an event this month. In the latest edition of his Power On newsletter, Gurman said "the big iPhone 14 unveiling last month was probably it for Apple in 2022 in...
Read Full Article • 170 comments