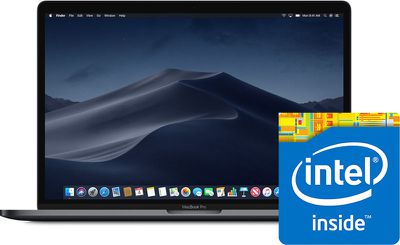 Sunny Cove microarchitecture, built on a 10nm process, will be the basis for Intel's next-generation Core and Xeon processors later next year according to the company, making them appropriate for potential 2019 models of the MacBook, MacBook Air, MacBook Pro, iMac, iMac Pro, Mac Pro, and Mac mini.

Intel did not provide a comparison of Gen11 and Gen10 graphics, paired with Cannon Lake-based processors.

For those who are ever-confused by Intel's roadmap, it is believed that Sunny Cove processors paired with Gen11 graphics will be called Ice Lake, which succeeds Coffee Lake, Whiskey Lake, Amber Lake, and Cannon Lake.

Intel reaffirmed its plan to introduce a discrete graphics processor by 2020, providing Apple with another option beyond its current provider AMD and former provider Nvidia for future MacBook Pro, iMac, iMac Pro, and Mac Pro models.

Intel has essentially been iterating on its Skylake microarchitecture since 2015, so it is refreshing that the chipmaker is finally moving on to something new. But with rumors of Macs switching to custom ARM-based processors as early as 2020, it might not be long after Sunny Cove that Apple moves on too.

UltimaKilo
I'll believe it when I see it!
Score: 25 Votes (Like | Disagree)

aaronhead14
All I want is a modular Mac Pro tower, similar to the 2012 Mac Pro but with new hardware. Please make it happen Apple!
Score: 21 Votes (Like | Disagree)

Optheduim
Still unsure about how I feel about Mac moving away from Intel. While I loved my G4 macs, I love my Intel macs wayyyy more....
Score: 18 Votes (Like | Disagree)

iTuna
I think Apple is more than happy to keep putting three-year-old chips in its machines.
Score: 12 Votes (Like | Disagree)

All I want is a modular Mac Pro tower, similar to the 2012 Mac Pro but with new hardware. Please make it happen Apple!

I think we get it; since you post that on nearly every single Mac thread on here! ;-)
Score: 11 Votes (Like | Disagree)

cppguy
If they create an ARM-based Mac, it'll probably be an ultrabook. I seriously doubt their Pro models will go ARM, because there's no software for it yet. It must be a gradual process, because we have to wait for Adobe, AutoDesk, VMware and others to rebuild their software for ARM. Not to mention running a Windows VM. Although Microsoft is moving to ARM as well. But they have the same problem, app compatibility. The whole benefit of Windows is that it can run everything, even games from 1994.
Score: 9 Votes (Like | Disagree)
Read All Comments