Google released Chrome 71 earlier this week, but the latest version of the web browser still lacks support for Dark Mode on macOS Mojave. Fortunately, it appears that will change by early next year. 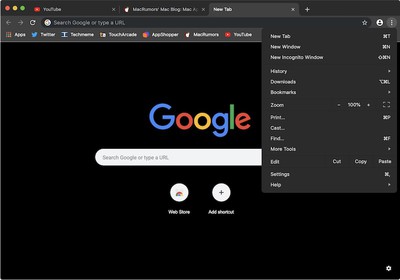 Dark Mode in Canary, a developer build of Chrome
As mentioned on Reddit, a Google developer recently submitted a code change that implements system-level Dark Mode in Chromium, the open source web browser that serves as the foundation of Chrome. The code change passed the review process and will make its way into a future release of Chrome.

For those unaware, there are several different builds of Chrome that Google uses to slowly test and roll out new features. All code changes begin in Chromium and then work their way from Canary to Chrome Dev to Chrome Beta to Chrome, the stable version released to all users roughly every six weeks.

Dark Mode in Canary, a developer build of Chrome
Dark Mode in Chromium remains hidden behind feature flags, which are essentially code-level toggle switches, but we were able to run a Terminal command to force the darker appearance into action and took screenshots.

The system-level Dark Mode applies a dark appearance to much of the Chrome interface, including the omnibox, tabs, menus, bookmark bar, status bar, and dialog boxes. The startup page with Google search and shortcuts will also have a black background when the Dark appearance is enabled in System Preferences.

Most of the current Dark Mode colors in Chromium are placeholders, according to one developer working on the project, so there may be slight changes to come. One challenge the developers face is ensuring that the Dark Mode is distinguishable from Chrome's private-browsing Incognito Mode, which is also dark.

Incognito Mode in Canary, a developer build of Chrome
We're not entirely sure if Dark Mode will make the cut for Chrome 72, which has already been branched and will likely be released in mid-to-late January. Chrome 73 will likely follow in March, so it looks like early 2019 either way.

Tsuius
The question is why would anyone install google's browser (regular or dark) on their computer to allow even more tracking?
Score: 43 Votes (Like | Disagree)

Think you got your tinfoil hat on too tight. Besides, I use it cause it “just works”. Can’t say the same about Safari.

A true tinfoil hat wearer would line the inside with something that doesn't hurt. When you mold tinfoil it gets sharp edges and can really hurt. Now the wifi waves can't penetrate my brain! Government will never know what I'm thinking. Ehehe :)

Chrome works but it is resource heavy. That and it's run by a company that makes $ off of what you do. I'm personally tired of companies that sell my personal data for $ so I've quit social media, Google, etc... Now, I do use Bing and Microsoft with Adguard - but not Cortana.

Apple_Robert
In my opinion, Google should be treated as malware, even though it will / is enticing to many luring them to the dark side.
Score: 9 Votes (Like | Disagree)

2ms
Why would anyone want to use Chrome on Mac? Genuinely curious. It's non-native so it's slower. But it used the same engine (WebKit). So what would be the advantage? I could understand on Windows it's an alternative to Explorer, but on Mac we have Safari and of course there's always Firefox as well. Really don't get it.
Score: 7 Votes (Like | Disagree)

The question is why would anyone install google's browser (regular or dark) on their computer to allow even more tracking?

Think you got your tinfoil hat on too tight. Besides, I use it cause it “just works”. Can’t say the same about Safari.
Score: 6 Votes (Like | Disagree)
Read All Comments