DxOMark today published the results of its in-depth analysis of the iPhone XR's single-lens rear camera. Apple's flagship smartphone achieved an overall score of 101 points, surpassing Google's Pixel 2 to make it the top-ranked single lens phone in the site's rankings. 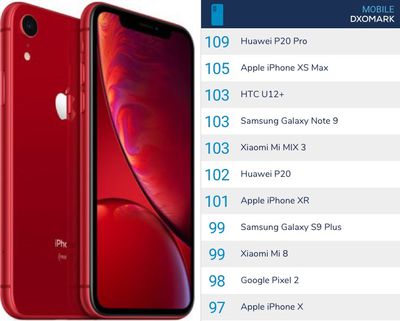 In its testing, DxOMark found the iPhone XR to offer "a very similar proposition for image quality as the flagship iPhone XS Max," across key photo attributes like exposure, color, detail, noise, and artifacts.

Both devices also achieved the same overall score for video, but the dual lenses of the iPhone XS Max meant the XR fell behind on zoom and bokeh shots, although DxOMark noted that Apple had managed to improve the flash on the more affordable single-lens iPhone.

Colored panels shot on iPhone XR
The review adds that the iPhone XR has very good exposure and dynamic range in bright light and indoor conditions, while detail is well-preserved in all lighting conditions with "vivid and pleasant colors in most situations."

Apple iPhone XS Max, HDR test scene for comparison
DxOMark concludes that the photographic capabilities of the iPhone XR are "broadly similar to those of the XS/XS Max" which should make the less-expensive model "desirable to many Apple enthusiasts looking to upgrade their smartphone."


"Compared to the Google Pixel 2, which is the best single-cam smartphone we’d tested up until now, the results are very comparable in many areas, but thanks to improved results for noise and particularly for artifacts, the iPhone XR just nudges it out of first place to become our top-ranked single-cam smartphone."

For its scoring and analysis methodology, DxOMark says its engineers capture and evaluate over 1,500 test images and more than two hours of video both in controlled lab environments and in natural indoor and outdoor scenes, using the camera's default settings.

DxO is a well-known French image lab that has been reviewing smartphone cameras for several years, but they aren't immune to criticism, which just goes to show how subjective image quality can sometimes be.

tbayrgs
Only because they haven’t tested the Pixel 3 yet. ;)
Score: 33 Votes (Like | Disagree)

HacKage
We going to pretend DxOMark is relevant now that it favours an iPhone?
Score: 22 Votes (Like | Disagree)

We going to pretend DxOMark is relevant now that it favours an iPhone?

I had to smile to myself when I read your comment as it was exactly my thought.
Over the past few years when the iPhone was beaten by this companies score, we saw the majority of posters rubbishing this company and it's tests/results.

I was/am keep to see if this opinion here now changes that Apple have got to the top in the category again ;)

I would love to believe people stick to their guns, and don't flip/flop their opinion simply based upon current results.
Score: 14 Votes (Like | Disagree)

thadoggfather
The XR is such a misunderstood product... reminds me of iPhone SE in that sense.

Google should seriously consider taking the hint and a play from Microsoft’s book and just get out of the smart phone business. I cannot see any reason why anyone would buy a pixel and they cannot claim that the camera is better anymore. (Which it really never was and there is speculation they paid Dx to skew the results in their favor)

That's the most hilarious post today, thanks for the laugh :D

Yes, Google should exit the smart phone business, the one their operating system OWNS
Score: 5 Votes (Like | Disagree)

Well since it uses the same camera as the Xs's it should get a similar score. Probably only top dog for single camera till the Pixel 3's are tested though (funny they haven't been already...maybe Google was holding them back waiting for their night mode to be released into production before doing it).

I'm sure the Pixel 3 was tested weeks ago. DxOMark intentionally staggers all of these test results and their releases so that they can better generate steady revenue streams throughout the year. In a sense their tests and arbitrary scoring is all rigged because they already know that every flagship phone release will beat the previous by a slim margin even though the differences are too subtle for users to observe. Maybe consumers will one day understand that the smartphone camera war ended a long time ago.
Score: 4 Votes (Like | Disagree)
Read All Comments