Apple today announced a new update for Final Cut Pro X, which introduces support for workflow extensions that will allow professional video editors to use third-party apps and services directly within the Final Cut Pro app.

Workflow extensions have been designed to match the look of Final Cut Pro, offering tight integration with the app. Media can be dragged into Final Cut Pro libraries, playback can be synced between extensions and the timeline, and more.


Extensions include Frame.io, which enhances post-production, Shutterstock, which allows for browsing and purchasing stock footage, and CatDV for media asset management. 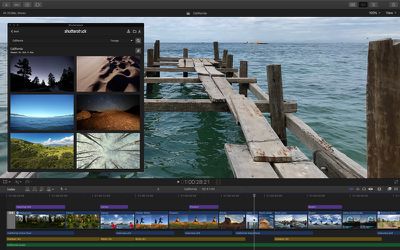 Workflow extensions for Final Cut Pro can be downloaded from the Mac App Store starting today, with Apple planning to add additional third-party FCP extensions on an ongoing basis.

Along with extensions, the new version of Final Cut Pro introduces batch sharing for exporting multiple clips or projects in one step, a new Comparison Viewer window is available for letting editors view reference images while working on color grading, and marquee selection has been improved to make it easier to select individual clips.

Apple has added a new floating timecode window to make it easier for video editors to follow along with color-coded clip names, roles, project timecode, and source timecode, all presented in a customizable display.

New noise reduction tools are designed to minimize artifacts in low light footage, and editors can create closed captions in an SRT format or burn them into a video for wider compatibility with various websites.

Motion, the motion graphics companion app for Final Cut Pro, is also being updated today. It gains a comprehensive set of color grading tools that match the color correction features available in Final Cut Pro along with new filters for comic and tiny planet effects.

Compressor, another FCP companion app, now uses a 64-bit engine that better takes advantage of all of the memory in a user's Mac and it supports SRT closed captions.

CmdrLaForge
Now bring back Aperture and we are good
Score: 15 Votes (Like | Disagree)

We need final cut for the ipad now

I honestly hope not. Knowing Apple and their Modus operandi, we would get a Mickey Mouse Version of FCPX on which the whole development team and the gardener was working on. With the unfortunate result that the MacOs Version wouldn’t see upgrades for centuries. And it took already quite a while to bring FCPX on speed.
Score: 13 Votes (Like | Disagree)

PlainviewX
That only took a decade to implement.....
Score: 12 Votes (Like | Disagree)

That only took a decade to implement.....

Even when Apple does something good, you still complain? They can't win lmao. :D
Score: 10 Votes (Like | Disagree)

I honestly hope not. Knowing Apple and their Modus operandi, we would get a Mickey Mouse Version of FCPX on which the whole development team and the gardener was working on. With the unfortunate result that the MacOs Version wouldn’t see upgrades for centuries. And it took already quite a while to bring FCPX on speed.

See also: what happened to the iWork suite back when the '09 version got "upgraded" to a lowest-common-denominator garbagefest. Keynote, for instance, used to have tons of really powerful control palattes you could spread out around your screen to control everything (kind of the way Adobe Creative Cloud apps work). Now it's got one ****y inspector that you'll find yourself constantly switching around to its different functions. Why is this? So the interface can be more or less identical on iPad, Mac and iCloud.com. I'd rather my Mac apps remain powerful, not get crapped down to the level of what iOS devices are capable of dealing with.
[doublepost=1542313222][/doublepost]

WE have this massively powerful iPad, and the software is holding it back. Also editing with a finger is so much more clumsy than using a proper mouse. Hopefully the next version of iOS will add some sort of file support, other than the photo stream.

To be fair, there is now the Files app for what that's worth. When working in apps that plug into it correctly, it's quite decent. It's no Finder, of course, but it at least lets you open/save to proper folders that sync over to your Mac.
Score: 9 Votes (Like | Disagree)
Read All Comments